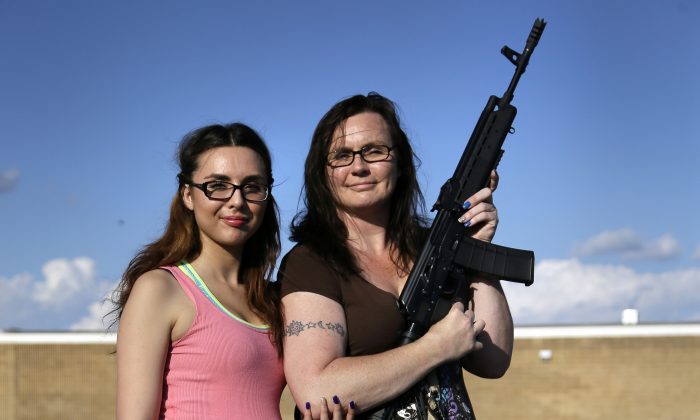 When the NRA thinks you have gone too far, is it perhaps time to take a chill pill?

Open Carry is doing a foolish thing. It is giving Texas a bad name. Open Carry members have been carrying rifles, including military-style assault rifles, into public places—not shooting ranges, but restaurants and coffee shops. Such a bad idea!

Don’t get me wrong. I’m not anti-gun. And I’m certainly not anti-Texas. The first time I went to Texas was for a parade. I was enchanted by the gun-toting, law enforcement men on horseback wearing ten-gallon hats and silver stars on their chests, who escorted us through Houston. What could be cooler?

One of my best friends in high school was a Texan. Gary Kilgore was lanky, because young male Texans are required to be lanky. In his room he had Tony Llama cowboy boots lined up like soldiers, in varied reptilian and ostrich glory. He was wont to give us venison that he had killed (I want to say with his bare hands, but am sure that would be exaggerating). The job was probably accomplished with a rifle.

His daddy was rich and his mama was good looking, just like in the song. She practiced yoga and had both wit and blue eyes. His tall daddy had a good heart, a big smile, and a talent for business.

As teenagers, we used to shoot cans in the woods. Kilgore grew up to be a man’s man, as expected, and taught his two sons how to hunt. He snake-proofed his hunting dogs. (Don’t ask).

As gun-loving and macho as he is, I am 100 percent sure Kilgore would never saunter lankily into a Chipotle with an assault rifle. He would not do it because this is the behavior of a weasel.

If I was in a Chipotle, or Starbucks, or the other places these folks have afflicted, and I saw someone toting an assault rifle, I would probably be momentarily haunted by a whisper of a thought. I would ask myself, is this about to be a mass shooting? And I would tell myself, no, it’s just one of those open carry dweebs.

OK, I am sorry to call you names, but I kid because I love. If any of you are reading this, I apologize, but let me tell you: You are scaring people, and that is mean. I lost my temper there for a minute, because you scare me.

Even the NRA thinks you might be on the wrong track. The NRA has long been a zealous advocate for gun owners’ rights. But the group’s lobbying arm, the Institute for Legislative Action, has called the demonstrations counterproductive to promoting gun rights, scary and “downright weird.”

“Using guns merely to draw attention to yourself in public not only defies common sense, it shows a lack of consideration and manners. That’s not the Texas way. And that’s certainly not the NRA way,” the NRA said in a statement posted on its website Friday.

Thank you NRA, for saying something a lot of us were thinking.

On its Facebook page, Open Carry Texas fired back: “It is unfortunate that an organization that claims to be dedicated to the preservation of gun rights would attack another organization fighting so hard for those rights in Texas. The more the NRA continues to divide its members by attacking some aspects of gun rights instead of supporting all gun rights, the more support it will lose.”

Open Carry has lost the support of Chipotle, which asked customers last month not to bring firearms into its stores after members of Open Carry Texas brought military-style assault rifles into one of its restaurants in the Dallas area.

It never had my support. It’s a pointless piece of theater. It does nothing to move the conversation about weapons and law in a rational direction.