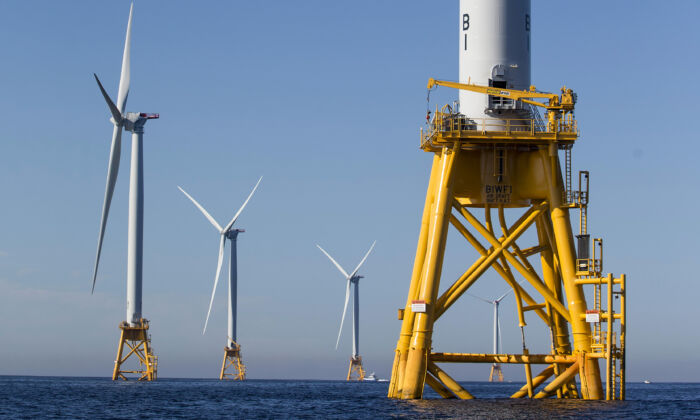 The first offshore wind farm in the United States was supposed to have signaled a turning point in the green energy revolution. Instead, officials have spent the past five years mired in equipment failures and struggling to respond to concerns about potential environmental damage.

Block Island is Solyndra all over again—except this time, wasted tax dollars won’t be the only consequence. This problematic project and others in the works, such as the Vineyard Wind project off the coast of Rhode Island, threaten to destroy the U.S. fishing industry, raise already high energy costs, and threaten precious endangered wildlife that exist only in the region.

So much for “going green.”

Of the Block Island farm’s five turbines, the latest eyewitness reports are that only one is functional. In the summer of 2021, the turbines were shut down after General Electric noticed stress fractures in the turbines. While the shutdown was labeled “routine maintenance,” given that most wind turbines only last 20 to 25 years anyway, the nation’s first offshore wind farm has an unimpressive track record. Meanwhile, Block Island residents have enjoyed continued access to electricity because of a connection to the mainland or backup diesel generators.

A longer-running problem is the transmission lines, which came unburied from the seabed starting in 2017, exposed by the waves just months after installation, creating a significant safety hazard and costing tens of millions of dollars to repair.

Offshore wind is widely heralded as a proven technology, used all over the world to harness the supposedly limitless potential of green energy. So why have there been so many failures?

Compounding these concerns is the environmental devastation that could come with continued wind development on our shores. The proposed Vineyard Wind project, for example, threatens the North American right whale, a species close to extinction with fewer than 400 whales remaining. Even staunch supporters of wind energy are having a hard time rationalizing why the Biden administration would approve the facility squarely in the middle of a severely endangered species’ foraging and nursing grounds—violating several federal laws in the process.

Perhaps more concerning, but even less talked about, is the environmental destruction caused by the mining of the rare earth metals and other scarce materials necessary for constructing renewable energy equipment. For example, every offshore wind turbine requires a ton (literally) of neodymium, which is mined almost exclusively in China with total disregard for the environment. Firsthand accounts of China’s rare earth mines tell of lakes of toxic sludge and “cancer villages” where people and livestock suffer devastating sickness from the mines’ waste.

Though the liberal wing is quick to jump on any and every potential environmental effect of a proposed subdivision or fracking well, its silence on offshore wind’s threat to our country’s precious natural beauty is deafening.

Of course, humans will suffer from these projects, too. Every significant expansion of wind and solar power in global history has led to a sharp increase in the cost of electricity—and made that electricity less reliable.

Germany, for example, brands itself as the world’s leader in the energy transition. But its Energiewende has been a near-total failure. After 20 years, fossil fuels still provide 78 percent of the country’s energy, and a significant portion of its so-called renewable electricity generation comes from biomass, or burning wood, which produces significant air pollution and more carbon dioxide emissions than coal. Meanwhile, Germans are paying the highest electricity prices in Europe.

Do we really want to end up like Germany?

In addition to the direct effect on electricity costs, offshore wind development also threatens to raise food prices even further because it threatens U.S. fishing businesses, which provide a significant portion of the country’s seafood supply. The Biden administration was aware of this when it approved Vineyard Wind, conceding in public documents (pdf) that “due to the placement of the turbines, it is likely that the entire 75,614-acre area will be abandoned by commercial fisheries due to difficulties with navigation,” costing small businesses millions.

Questioning the “energy transition” narrative may be taboo, but an open-minded analysis of what we know so far about wind energy—offshore and inland—shows too many consequences and too few benefits. It’s too late for Block Island, but the Texas Public Policy Foundation has filed a lawsuit against the Biden administration to stop the Vineyard Wind project, which was approved in violation of several laws and legal protections for affected stakeholders.

Americans overwhelmingly want affordable, reliable electricity and environmental quality. Embracing the fossil fuels that have helped our nation become prosperous and a world leader in clean air is the best solution for all.