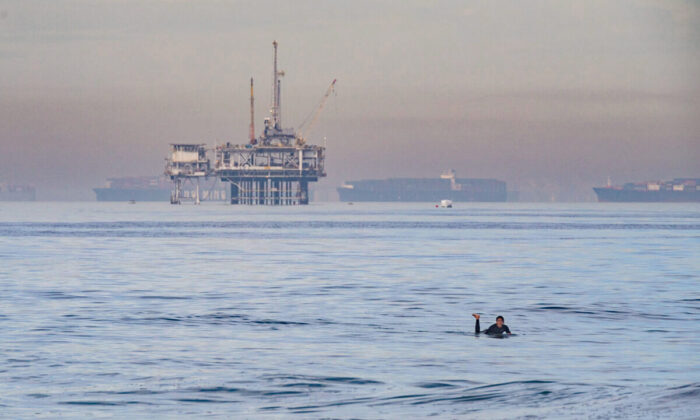 Cleanup efforts are underway for an oil spill of the coastline of Orange County in Huntington Beach, Calif., on Oct. 4, 2021. (John Fredricks/The Epoch Times)
Southern California

Offshore Oil Drilling Would Be Banned in California Under New Bill

Offshore oil drilling would be banned in California under a new bill, following last year’s oil spill near Huntington Beach.

Senate Bill 953, authored by state Sen. Dave Min (D-Irvine), would shut down three of the four oil rigs in the state by Dec. 31, 2023. The fourth oil rig is already in the process of being decommissioned, a spokesperson from Min’s office said.

“Where there is drilling, there is going to be spilling,” Min said in a statement. “Our coastal economies, our precious marine ecosystems, and our right as Californians to access clean and unspoiled beaches are all at risk.”

On Oct. 3, 2021, an oil spill off the coast of Huntington Beach that leaked 25,000 gallons of crude into the ocean led many officials to support an offshore oil drilling ban.

The senator said the state’s offshore oil rigs only account for 0.3 percent of all U.S. oil production.

Critics of the legislation say the ban will only mean that the oil will need to be imported from foreign nations with lower environmental or health and safety standards.

“California has the toughest regulations in the world. And so what’s not produced here comes from someplace else because demand is not going down,” Kevin Slagle, vice president of Western States Petroleum Association, told The Epoch Times, noting that California produces 30 percent of the petroleum it uses.

Slagle also said the state will be subject to a takings case, where the oil rig companies will be paid large sums of money for having to decommission their rigs prior to the ending of their leases.

“Why would you want to bring a ship across the ocean and have it sit in the port and then unload and deal with all the environmental issues that that could cause as opposed to producing it in the state and just pipelining it straight to the refineries. When you look at that situation, what’s better for climate change?” he said.

Other critics say the legislation would create a “series of vulnerabilities for the state,” by inviting more oil tankers into the already overcrowded ports of Los Angeles.

Some of these tankers can burn up to four tons of fuel per day and add 12 tons of carbon particulate to the atmosphere, Andrew Meredith, president of the State Building and Constructions Trades Council of California, told The Epoch Times.

Additionally, almost half of California’s oil comes out of the rainforests, Meredith said, where environmental devastation runs rampant, meaning the legislation would only increase production in the rainforests to make up for the demand.

“Politicians in Sacramento need to find ways to bring the cost of fuel down for California families, not make it more expensive. Nothing in this bill will do that. On the contrary, it will add to a long list of things driving the cost up for consumers,” Meredith said.

In response, Min told The Epoch Times that the economic benefit from the local oil extraction off the coast of California is not worth the “constant threat” oil spills pose.

“The $44 billion generated each year by our coastal economy, which is under constant threat from oil spills, is astronomically greater than the minuscule benefits we receive from offshore drilling,” he said.