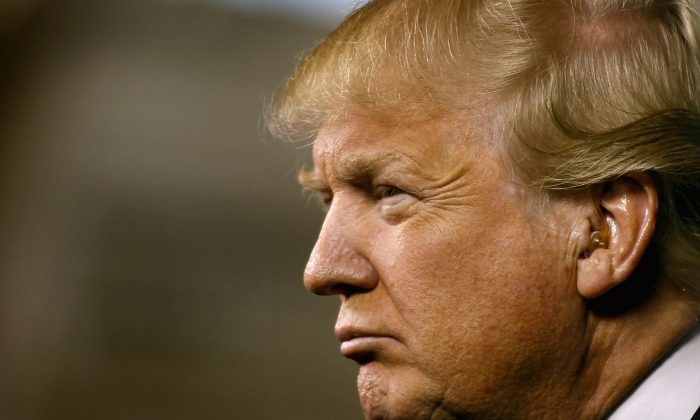 Donald Trump got a state park named after him because he donated the land to the government. But now state officials want to remove his name after his controversial call to ban Muslims immigrants from the U.S.

Sen. Daniel Squadron and Assemblyman Charles Lavine, both Democrats, said they will introduce legislation they’re calling the “Anything but Trump Act” and want Gov. Andrew Cuomo to remove signs for the 440-acre site in Westchester County.

Trump donated the land to the state in 2006 after plans for a golf course fell through due in part to environmental concerns. Budget cuts prompted the state to close the park in 2010, though signs for it remain.

Lavine, of Long Island, suggests the state rename the park for Peter Salem, a Revolutionary War soldier from Massachusetts who some believe was Muslim.

Salem, a black man, was “one of the Minutemen heroes” of the war, according to the African American Registry. He fought in a number of battles, and is credited with the shot that killed British Major John Pitcairn at the Battle of Bunker Hill. Salem later re-enlisted and fought in battles in Sarasota and Stony Point, both in New York state.

Other suggestions for the potential re-naming include folk singer and activist Pete Seeger.

“The rhetoric and discriminatory proposals we’ve seen from Mr. Trump don’t belong in the presidential election, and don’t belong in New York state parks,” said Squadron, of Brooklyn. “He has dishonored the state, and should not be honored with a state park named for him.”

A spokeswoman for Trump’s campaign responded by calling the park “a $100 million gift to the state.”

“Mr. Trump is the front-runner for president of the United States of the Republican Party,” spokeswoman Hope Hicks said. “He is a proud resident of New York who employs thousands of people. The state cannot remove his name.”

Hicks also provided a statement from Trump in which he said, “If they want, they can give me the land back.” He has reportedly threatened litigation to reclaim it if his name was removed.

A spokesman for Cuomo declined to comment on the matter. If the governor doesn’t act, then officials indicated the legislation should settle the issue.

“It is time the State of New York sends a message to Donald Trump that his hate speech is not welcome in our great state,” Lavine said, reported the NY Daily News. “I am confident that the Governor will take our letters into consideration. If he is unable to act, then we are prepared to move forward with this legislation.”

Cuomo has in the past criticized Trump. On Monday, the Democratic governor said Trump’s comments and his proposal to ban Muslim immigration do a “disservice” to the country and could actually encourage terrorist recruitment efforts.

“He is fanning the flames of hate,” Cuomo said on CNN. “One billion Muslims were just alienated with one sentence. At this point we don’t need more Muslim enemies. We need more Muslim allies.”