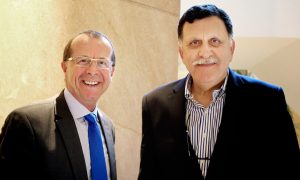 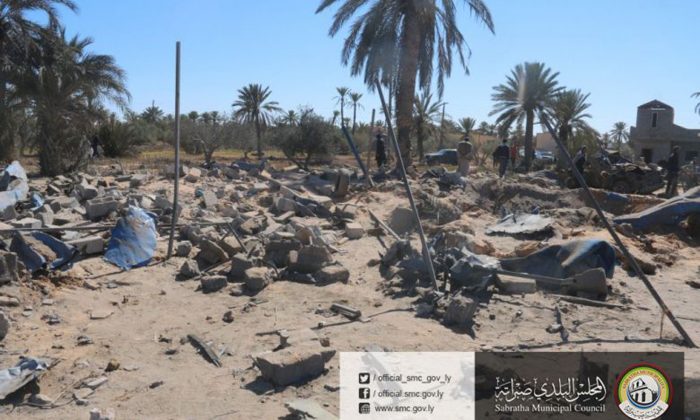 WASHINGTON—American F-15E fighter-bombers struck an Islamic State (ISIS) training camp in rural Libya near the Tunisian border Friday, killing dozens, probably including an ISIS operative considered responsible for deadly attacks in Tunisia last year, U.S. and local officials said. The strike did not appear to mark the beginning of a sustained U.S. campaign in Libya but a Pentagon spokesman said “it may not be the last.”

The spokesman, Peter Cook, said the U.S. is determined to stop ISIS from “gaining traction” in Libya. Cook said the training camp was “relatively new,” and that the U.S. has identified similar ISIS training camps elsewhere in Libya, suggesting potential future strikes in defense of regional and U.S. national security interests.

In Libya, local officials estimated that Friday’s U.S. attack killed more than 40 people with more wounded, some critically. Up to 60 people were believed to be at the camp, said a U.S. official, speaking on condition of anonymity to discuss intelligence-related information.

Political chaos in Libya has allowed ISIS to expand across the northern coast of the oil-rich North African country, which is just across the Mediterranean from Italy and has also become a major conduit for African migrants heading to Europe. ISIS controls the central city of Sirte and a number of oil installations.

Adding to the concern in Washington and Europe is evidence that the number of ISIS fighters in Libya is increasing—now believed to be about 5,000—even as the group’s numbers in Syria and Iraq are shrinking.

The Obama administration has said it would approve of international military support for counter-ISIS efforts in Libya once the country assembles a unity government. But it also has vowed to strike key targets when opportunities arise, such as Friday’s attack near the city of Sabratha.

The Libyan parliament is close to endorsing a new unity government cabinet, which could eventually seek international military intervention against ISIS extremists.

Cook said the U.S. airstrikes targeted extremist Noureddine Chouchane, a Tunisian national. Cook called him “an ISIL senior facilitator in Libya associated with the training camp,” using another acronym for the Islamic State.

Cook did not confirm that Chouchane had been killed but said “we feel good” about the effectiveness of the attack, which other officials said were conducted by F-15E strike aircraft based in Britain. Cook said unmanned aircraft, or drones, also were involved.

Cook said Tunisian officials in May 2015 had named Chouchane as a suspect in a March 18, 2015, attack on the Bardo Museum in Tunis in which 22 people died.

“He facilitated the movement of potential ISIL-affiliated foreign fighters from Tunisia to Libya and onward to other countries,” Cook said.

“Destruction of the camp and Chouchane’s removal will eliminate an experienced facilitator and is expected to have an immediate impact on ISIL’s ability to facilitate its activities in Libya, including recruiting new ISIL members, establishing bases in Libya, and potentially planning external attacks on U.S. interests in the region,” he added.

ISIS also claimed responsibility for a June 2015 attack at the Tunisian resort of Sousse in which 38 people were reported killed.

Before the Sousse attack, the Tunisian Interior Ministry issued a wanted poster for Chouchane. He is originally from the Sidi Bouzid region, where the 2011 revolution that ousted President Zine el-Abidine Ben Ali was triggered when a fruit and vegetable seller set himself on fire.

After the Sousse resort attack, the then-security chief for Tunisia, Rafik Chelli, told AP that the suspects killed in the Bardo and Sousse attacks had received military training in a camp in Sabratha.

On Friday, a witness in Sabratha said he heard two explosions at 3:30 a.m. coming from the nearby village of Qasr Talel, at the same time the Pentagon said the airstrike began. He said the house that was hit belongs to Abdel-Hakim al-Mashawat, known locally as an ISIS militant, he said. The witness spoke on condition of anonymity because he feared for his safety.

The official Facebook page of the Sabratha local city council also put the death toll at more than 40 with more wounded, some critically. “There are torn body parts buried under the rubble,” it said in a posting. It said the victims were not all Libyans. The witness said he saw a hospital list that noted victims were from Tunisia and Algeria as well as Libya.

Sabratha is one of the main launching points for smugglers’ boats heading to Europe. It has been also a transit point for Tunisians and North African jihadists before joining ISIS affiliates elsewhere in Libya.

Cook said Friday’s airstrike was taken “with the knowledge of Libyan authorities,” but he would not be more specific about any coordination.

In November, a U.S. military airstrike killed an ISIS leader named Abu Nabil or Wissam al-Zubaydi, an Iraqi national in the eastern city of Darna.