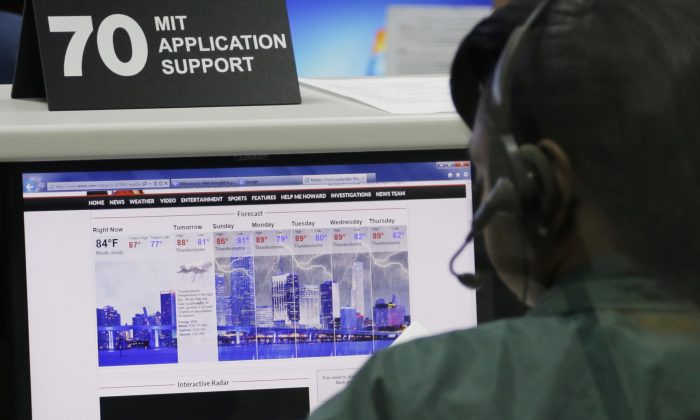 A Miami-Dade County worker keeps an eye on the weekly weather forecast for the Miami area at the Miami-Dade State Emergency Operations Center, Friday, Aug. 28, 2015, in Doral, Fla. (AP Photo/Alan Diaz)
US

ST. PETERSBURG, Fla.—Tropical Storm Erika may be getting weaker, but Florida officials still want residents to be prepared.

Despite greater uncertainty in the storm’s path and intensity, Florida Gov. Rick Scott declared a state of emergency on Friday for the entire state. Officials say residents should prepare by filling vehicles’ gas tanks, stockpiling a few days’ of food and water, and determining whether they live in an evacuation zone. The storm has the potential to rake Florida’s west coast with heavy rains starting late Sunday or early Monday.

Tropical Storm Erika is forecast to weaken into a tropical depression, the National Hurricane Center reported Friday. During the 11 p.m. announcement, meteorologists said they expect Erika to be downgraded to a depression Saturday. There’s even a possibility that the storm could dissipate to a trough of low pressure during or after its passage over Hispaniola.

Officials say there’s “a significant chance” that no watches or warnings for Florida will be required over the weekend.

Meteorologists at the National Hurricane Center in Miami say several factors come into play over the next 24 hours that will determine whether Erika is little more than a rainstorm for the Sunshine State.

Chris Landsea, a meteorologist with the National Hurricane Center, says Tropical Storm Erika is an extremely disorganized storm, which is making it difficult for forecasters to track. A hurricane is stronger, better formed and has an eyewall. Hurricanes also have a more regular motion pattern, unlike tropical storms, which can be large blobs of weather.

“For track prediction, it’s actually easier to track a strong hurricane than a sloppy tropical storm like Erika,” Landsea said.

Ocean water in the Pacific is actually affecting Erika in the Caribbean. Meteorologists say the weather pattern of warm ocean water weakens storms in the Atlantic. El Nino is one reason behind a quiet hurricane season overall this year.

Erika is “fighting for its life right now,” said MIT meteorology professor Kerry Emanuel. He said there’s a small possibility that Erika could intensify but called that unlikely. That’s because strong winds aloft are weakening the storm — called wind shear — and that’s typical for years with an El Nino, like the current one.

Given how weak the storm is and how dry Puerto Rico and parts of Florida have been, “it could be a net benefit, this thing,” Emanuel said.

Erika is forecast to pass near, or over, the tall mountains of the Dominican Republic. It could easily break apart over that terrain, forecasters say.

Because this storm is so difficult to forecast, it’s unclear where __ or whether __ it will make landfall in Florida. Meteorologists say the potential for heavy rainfall, flooding, rip currents and storm watches/warnings will emerge over the weekend as the system moves closer to the U.S.