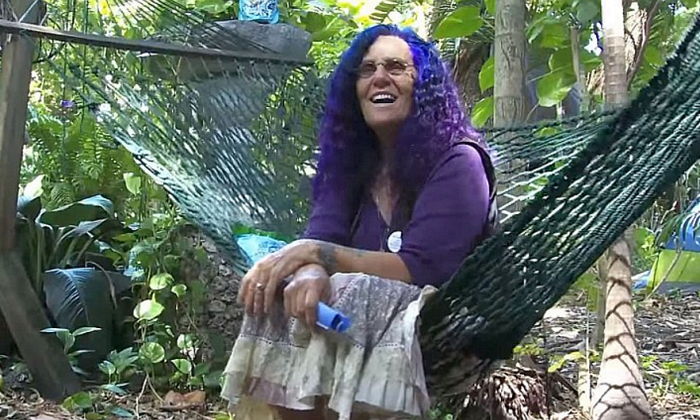 Officials Tell Grandma to Remove Her Treehouse in Miami

MIAMI—Miami-Dade County says a woman’s open-air treehouse was built illegally, is unsafe and must be demolished in the next four months.

The Miami Herald reports Shawnee Chasser refuses to remove her treehouse nestled against the forked trunks of an oak and strangler fig in the wooded front yard of her late son’s Biscayne Gardens home.

The fight sets up an only-in-Miami showdown between a $7 billion government and a 65-year-old grandmother who sells bags of organic popcorn at Whole Foods.

“I’m not taking down anything,” Chasser vowed during an interview. “I’ll chain myself to that tree house.”

Chasser, who discovered her aversion to indoor living decades ago, has slept in a tree since 1992 after she moved her family back to Miami from California.

The county’s issue with Chasser’s abode isn’t specifically that she lives there, says Roig, but that it’s unsafe.

The cottage, which can’t be seen from the street, is off to the south side of “Shawnee’s Paradise,” on the corner of Be Here Now Street and Joshua’s Way, an ode to her late son, who died inside his house in 2009 of a heart attack. The property — recently featured by the Tiny House Giant Journey travel blog — is just under a half-acre of wooded lawn stretched around a man-made pond and waterfall and hiding from its surroundings behind a hedge.

A land trust run by Chasser’s daughter bought the home in 2013. Chasser makes the property available to tenants who want to rent rooms, a mini-camper, or even set up tents in the front yard. It helps her pay the bills, along with proceeds from Shawnee’s Greenthumb Popcorn, which she mass produces and sells.

But everything changed about a year ago, when someone called 311 to complain that Chasser was running the property like an apartment complex and campground in the middle of a single-family neighborhood. Chasser, who says she’s tight with her neighbors, blames a booted tenant. But the unexpected visit from county code enforcement last September jarred her world.

She was issued a citation for illegally running a rooming house and for work conducted at the property without permits, including the tree house.

“This has got to be my first time ever of somebody living in a tree house,” said Ricardo Roig, Miami-Dade’s code enforcement division director and a 26-year county employee.

Roig said South Florida has strict rules about building code due to the frequency of hurricanes, and added that running water and electricity have to be installed with permits and inspections. He said Chasser is welcome to live in a legal tree house, but code and unsafe-structure inspectors looked at the cottage and found it constructed in a way that it can’t be brought up to county standards. This week, the county’s unsafe structures board agreed and gave her three months to tear the house down.

Chasser, who has already paid $3,000 in fines, potentially faces more than $7,000 in additional liens, according to the county.

Chasser says she can’t afford to hire an engineer or architect to come help her bring her property up to code. Plus, even if she could, she said, the county tells her she’d still have to apply to the zoning department for permission to inhabit the units outside the main home on the property.

“When I am up in my tree house in thunder, lightning and rain I am in heaven,” Chasser said. “There’s nothing nicer, more spiritual, more wonderful.”