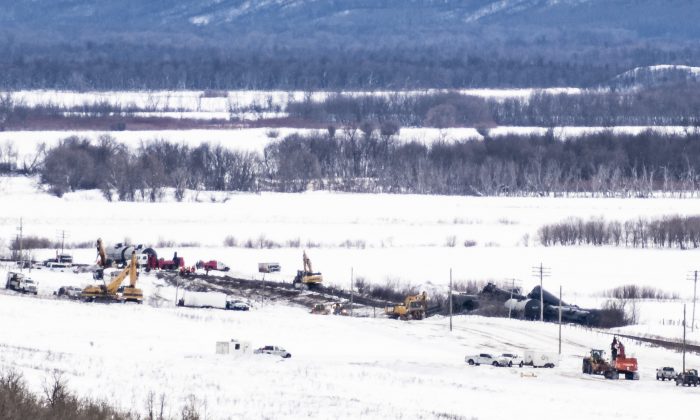 Excavators work at the site of a train derailment ten-kilometres south of St. Lazare, Man. on Feb. 16, 2019. (The Canadian Press/Michael Bell)
Canada

ST-LAZARE, Man.—Canadian National Railway says it doesn’t yet know how much oil leaked from a derailment in western Manitoba, but it says trains are now running on the line again.

The railway said Saturday there was “a partial leak” of crude oil south of St. Lazare, Man., but it was contained and none had reached a nearby river. They said in a statement that 37 cars carrying crude left the tracks early Saturday morning near St-Lazare, just east of the Saskatchewan-Manitoba boundary.

When asked on Sunday about how much oil spilled, and how many of the cars that derailed on Saturday leaked, a CN spokesman said it’s “still being assessed.”

“Several of the cars were leaking but the product has been contained and has not entered the Assiniboine River,” CN media relations director Jonathan Abecassis said in an email.

Transportation Safety Board spokesman Alex Fournier said investigators from the board spent Sunday at the site, but he didn’t have information about the quantity of the spill either.

He said he expected further information would be available on Monday.

Barry Lowes, reeve of the Rural Municipality of Ellice-Archie, Man., which surrounds St-Lazare, said Saturday that “quite a bit” of oil had spilled and there was a foul smell in the area.

CN said no one was injured in the derailment and there was no fire reported.

The Manitoba government said in an email Sunday that a number of provincial agencies were responding to the derailment, but that CN is leading the cleanup.

“While 37 cars have derailed, not all of them are leaking. There is no risk of contamination to the Assiniboine River,” the government email said.

CN said the derailment is still under investigation.

St-Lazare is about 50 kilometres from Moosomin, Sask., where conservative leaders spoke at a pro-pipeline rally.

Barry Lowes, reeve of the Rural Municipality of Ellice-Archie, which surrounds St-Lazare, attended the Moosomin rally later Saturday after viewing the derailment from a distance.

“I could see them off the track. I could see machinery working down there,” said Lowes, noting there was a foul smell in the area.

He said “quite a bit” of oil had spilled in an area close to the Assiniboine River, and one farmer lives close to the derailment.

He said it’s not the first derailment in the community: in 1991, about 400 residents of St. Lazare fled their homes when a train derailment spilled dangerous chemicals. They returned six days later.

Lowes said that isn’t happening with this derailment, but said there’s always a risk for the community.

“If you’ve got trains, you’re going to have derailments,” he said.