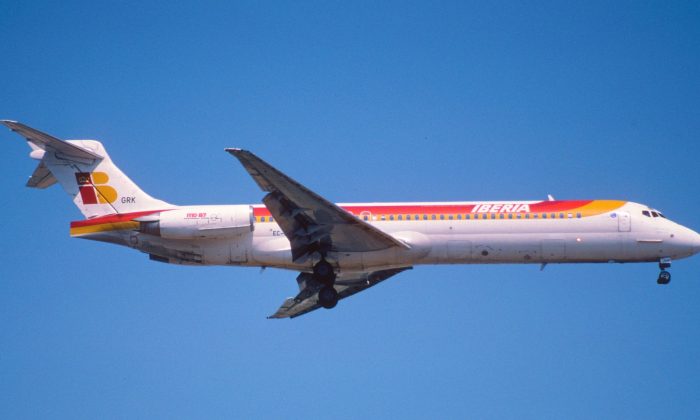 While many would imagine that a conspicuous object like a plane would get plenty of notice if left abandoned, at Madrid’s Adolfo Suárez Barajas airport, this was not the case.

At Europe’s sixth busiest airport, a McDonnel Douglas MD-87 has been left untouched for nine years, reported The Telegraph. Officials of the airport are now looking for the owner of the mid-range, commercial aircraft.

In a notice issued by the Official State Gazette (BOE) on Jan. 18, the director of Madrid-Barajas airport, Elena Mayoral, reported that the aircraft, which has license plate EC KRV, is in an obvious state of abandonment.”

When a plane appears to be abandoned, an investigation into a possible change of ownership as well as locating the last registered owner is conducted by the Aircraft Registration Registry of Spain’s Air Security Agency (AESA) and the Central Property Registry, Spanish news agency EFE reported.

The last registered owner will then be notified through official request, which asks the owner to pay the prolonged parking fee they owe. If the debt is not paid, the Spanish Tax Agency is then involved in trying to recover the fees, until either the fee is paid in full or the agency begins enforced collection.

According to Spanish aviation law, during a period of three consecutive months, three notices will be published on the BOE. If the owner fails to claim the plane after a year, the plane can then be sold at public auction, and the proceeds from the sale minus expenses would go to the state, said the BOE notice.

Based on data from similar models, the plane is estimated to be worth $2.6 million. A luxurious private jet that was converted from a similar plane is currently selling for $3.8 million at a California jet sales company.

No other aircraft is currently abandoned at the airport, according to a spokesperson of Madrid Barajas airport, reported CNN.

The MD-87, which has the capability of carrying up to 130 passengers, has a history of ownership by failed businesses.

In 1990, the new plane was first brought by Iberia, the flag carrier airline of Spain that was founded in 1972. The jet remained Iberia’s property until eighteen years later, when Pronair brought the plane in 2008.

Pronair is a charter airline that was headquartered in Albacete in Castilla-La Mancha. Before it was closed down in 2009, the airline flew regularly to China. Fuel price increases and the 2008 financial crisis were likely what resulted in the airlines to cease its operations, El Pais reported.

In July 2010, Saicus Air, a cargo airline based in Las Palmas in the Canary Islands acquired the plane. However, instead of flying for Saicus air, the MD-87 was rented to third parties.

Saicus Air was born in 2008 after buying an airline, Flyant, that had ceased operation. Based in Mallorca, Flyant was a cargo airline that was founded in 2006. However, merely two years later, the airline was sold for the nominal amount of euro to New Iberital, which was later rebranded to Saicus Air.

In 2010, Saicus Air began to expand to include passenger services and the MD-87 was purchased in the same year. Although Saicua said in November 2010 that the plan was for the MD-87 to fly passengers between Madrid and Guinea Bissau twice every week, the jet never did.

In December 2010, Saicus Air filed for bankruptcy and it is believed that the plane has been left abandoned since then.

It appears someone had sealed off the motors, pilot-static system, Pitot tubes and other openings of the aircraft before abandoning it. Despite the precautions, years of abandonment has taken its toll on the plane.

In 2015, a similar case was reported at Kuala Lumpur International Airport in Malaysia.

Compared to the MD-87, the aircraft in Kuala Lumpur were left abandoned for much shorter period time—over a year. However, the abandoned aircraft were Boeing 747s, and there were three of them.

Airport officials placed ads in Malaysia’s The Star and Sin Chew Daily newspapers, hoping that the owner of the jets, which were abandoned at different times, would come forward to claim their property.

However, as it happens, no one claimed the Boeing 747s, which were auctioned off for scrap two years later in 2017.

Abandoned planes are not rare—there are many of them parked at “plane graveyards” around the world. However, it’s not often for a plane to be left untouched for years at a working airport, since the industry has procedures in place for handling aircraft that are no longer in use.