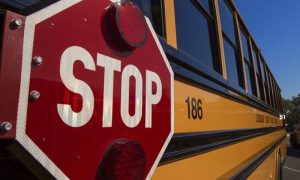 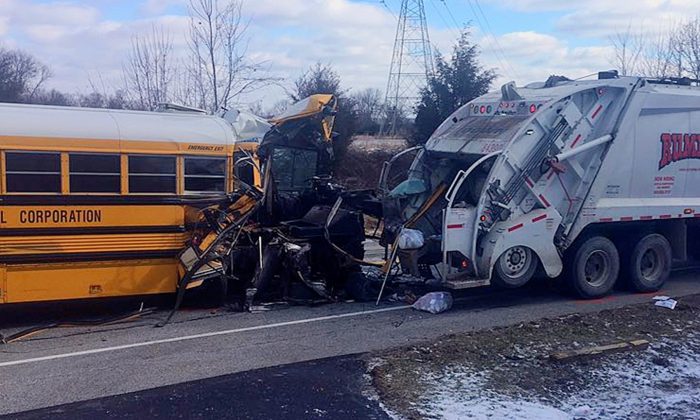 A school bus collided with a garbage truck near Aurora, Ind., on March 6, 2019. (Sgt. Stephen Wheeles/Indiana State Police via AP)
US News

Preliminary information indicates that 18 students, the bus driver and the driver of the garbage truck were injured in the crash, said Indiana State Police Sgt. Stephen Wheeles.

Aerial video from the scene shows the front of the bus smashed into the back of the garbage truck.

No additional details about the seriously injured student were immediately released.

Christa Armbruster had 2 nephews on the bus. Armbruster said she knows the man behind the wheel is “an excellent driver” who’s been driving the school bus for years.

Christa Armbruster had 2 nephews on the bus this morning, Kadence was just released after getting stitches. Kadence tried to free his cousin, Jordan Cole, when he was pinned under a seat. He is at Children’s Hospital, his family says he has 2 broken legs @WCPO pic.twitter.com/uljn2iJQSb

Middle school student Dakota Jones said he was on the bus when the crash occurred along State Road 350 and students began screaming.

Jones described the chaos, telling the driver immediately checked on the students as they got off the bus.

“All I saw was dust. I heard noises, I heard people screaming and I went to the back of the bus, just trying to get away from this, people were just—total panic. I was in shock,” Jones said.

New at Noon: 7th grader Dakota Jones was sitting near the front of the bus when it crashed into the back of a Rumpke truck. He described the chaos, telling us the driver was immediately checking on students as they got off the bus. @WCPO pic.twitter.com/Abrk9odGDA

The South Dearborn Community School Corporation said in a statement the accident happened about 8 a.m. along Highway 350.

This is a release from the South Dearborn Community School Corporation…..At approximately 8:05 AM there was an…

A spokeswoman for Rumpke Waste & Recycling tells the Cincinnati Enquirer that a school bus struck a Rumpke residential truck.

She says the garbage truck driver was not inside the vehicle when the collision occurred, but that the driver was injured by crash debris.

Wednesday’s crash follows a December school bus crash in northern Indiana that killed a 13-year-old boy. In that case, a truck driver told police he was removing his jacket and a sweat shirt just before his vehicle rear-ended the school bus.

In 2018, there was a rash of accidents at school bus stops, leaving several children dead across the United States.

The spate of school bus accidents started in Indiana on Oct. 30, when a driver failed to recognize a school bus’s flashing lights and hit four children who were crossing the street in Rochester to board a bus. The 24-year-old female driver was charged with three counts of reckless homicide following the incident. All three siblings died.

According to the National Highway Traffic Safety Administration in a recent report (pdf), there were 1,172 school-transportation-related fatal motor vehicle crashes between 2006 and 2015.

“From 2006 to 2015, 102 school-age pedestrians (18 and younger) have died in school-transportation-related crashes. Sixty-one percent were struck by school buses, 3 percent by vehicles functioning as school buses, and 36 percent by other vehicles (passenger cars, light trucks and vans, large trucks, and motorcycles, etc.) involved in the crashes,” the report said.