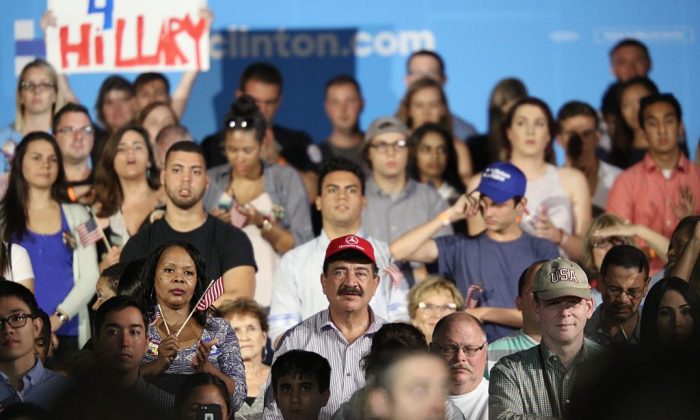 Seddique Mateen (C-red ball cap), whose son shot and killed 49 people and injured 53 others inside the Pulse nightclub in June, sits with supporters at a rally for Democratic Presidential nominee Hillary Clinton at the Osceola Heritage Park in Kissimmee, Florida on August 8, 2016. (GREGG NEWTON/AFP/Getty Images)
Crime and Incidents

The father of the Orlando nightclub shooter was a secret FBI informant, officials revealed over the weekend.

“Seddique Mateen was a FBI confidential human source at various points in time between January 2005 and June 2016,” lawyers for Noor Salman, the wife of the Pulse nightclub shooter, revealed in a court document that was filed on Sunday.

Salman, 31, has been charged with obstruction of justice and aiding and abetting her husband, Omar Mateen, in his allegiance to radical Islamic terrorist group ISIS.

Authorities searched the home of the elder Mateen in June 2016 and found receipts for money transfers to Turkey and Afghanistan in the months leading up to the attack at the nightclub in Orlando, which left 49 people dead, according to Sweeney.

“As a result of the discovery of these receipts, an FBI investigation into Seddique Mateen was opened,” she said in the letter quoted by Salman’s lawyers. “S. Mateen has not been informed by the FBI about the investigation.”

FBI Special Agent Juvenal Martin considered developing Omar Mateen into a confidential informant for the FBI after investigating him and not finding a tie to terrorism.

The letter also stated that Mateen was fundraising to contribute toward a planned attack on the government of Pakistan, the lawyers said.

Salman’s attorneys cited the letter’s revelations as to why there should be a mistrial, accusing the government of violating Salman’s rights to due process and a fair trial.

“It is apparent from the Government’s belated disclosure that Ms. Salman has been defending a case without a complete set of facts and evidence that the Government was required to disclose,” the court document said. “If the Government had provided this information, the Defense would have investigated whether a tie existed between Seddique Mateen and his son, specifically whether Mateen’s father was involved in or had foreknowledge of the Pulse attack.”

The lawyers have denied Salman had anything to do with the attack.

The Orlando Sentinel reported that Seddique Mateen was not called to testify despite being on the prosecutors’ witness list.

The defense lawyers started presenting their case on Monday.

Salman has apologized for what her husband did, telling The New York Times in 2016 that she was sorry.

“I don’t condone what he has done,” she told the newspaper, reported WFTV. “I am very sorry for what has happened. He has hurt a lot of people.”

In opening arguments, Linda Moreno, one of the defense lawyers, claimed that Salman has a low IQ, reported The Sentinel.

Moreno sought to portray Salman as a “trusting” and “simple” person who had no idea that “she would wake up a widow, and Omar Mateen a martyr for a cause that she didn’t support.”