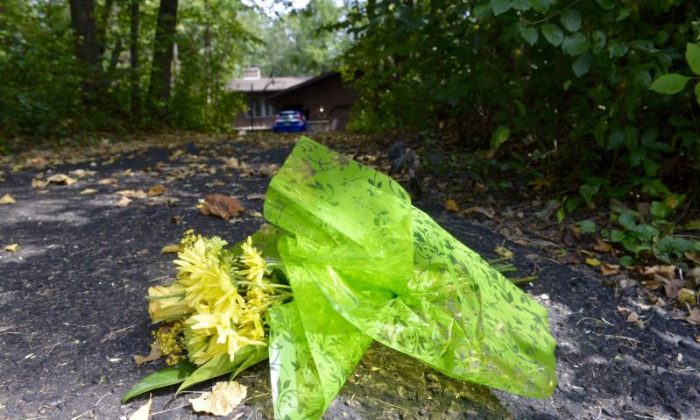 A bouquet of flowers is placed at the end of Jerry and Patty Wetterling's driveway as news has come out that the search for Jacob Wetterling may be over, Saturday afternoon, Sept. 3, 2016, in St. Joseph, Minn. Minnesota Gov. Mark Dayton and other officials are offering support to the family of Jacob Wetterling after his mother said the remains of the boy missing for nearly 27 years have been found. In a statement, Dayton says Jacob's story "has touched the lives and hearts of Minnesotans for a generation." (Kimm Anderson/St. Cloud Times via AP)
US

MINNEAPOLIS—The remains of Jacob Wetterling, an 11-year-old boy kidnapped from a rural Minnesota road nearly 27 years ago, have been identified, authorities said, providing long-awaited answers to a mystery that has captivated residents and sparked changes in the nation’s sex offender laws.

A masked gunman abducted Jacob in October of 1989 near the boy’s home in St. Joseph, about 80 miles northwest of Minneapolis. The Stearns County Sheriff’s Office confirmed in a statement Saturday that “Jacob Wetterling’s remains have been located” and that the Ramsey County medical examiner and a forensic dentist identified them Saturday.

Additional DNA testing will be conducted and investigators are continuing to evaluate new evidence in the case, the sheriff’s office said, adding that authorities expect to be able to provide more details early next week.

A law enforcement official told The Associated Press earlier Saturday that a person of interest in Jacob’sabduction took authorities to a field in central Minnesota last week. The official, who spoke on condition of anonymity because of the ongoing case, said remains and other evidence were recovered and that the remains had been buried.

Jacob’s mother, Patty Wetterling, sent a text message to KARE-TV earlier Saturday, saying that Jacob “has been found and our hearts are broken.” She did not immediately respond to calls and text messages from The Associated Press.

Jacob was riding his bicycle with his brother and a friend on Oct. 22, 1989, when a masked gunman abducted him. Authorities said the man held on to Jacob and told the other boys to run. Jacob hadn’t been seen since, despite extensive searches, tens of thousands of leads and offers of a monetary reward.

No one has been arrested or charged in his abduction, which led to changes in sex-offender registration laws.

But last year, authorities took another look at the case, and were led to Danny Heinrich, a man they called a “person of interest” in Jacob’s kidnapping.

Heinrich, 53, of Annandale, denied any involvement in the abduction, and was not charged with that crime. But he has pleaded not guilty to 25 federal child pornography charges and is scheduled to go on trial on those counts in October.

The FBI has said previously that Heinrich matched the general description of a man who assaulted several boys in Paynesville from 1986 to 1988. Earlier this year, Heinrich’s DNA was found on the sweatshirt of a 12-year-old boy who was kidnapped from Cold Spring and sexually assaulted just nine months before Jacob’sabduction.

Heinrich was questioned by authorities shortly after Jacob’s disappearance, but he denied involvement. Court documents say his shoes and car tires were “consistent” with tracks left near the site of Jacob’s abduction, but couldn’t be ruled an exact match. Authorities also searched the home where Heinrich lived with his father at the time and found scanners, camouflage clothing and a picture of a boy wearing underwear.

Heinrich’s attorney did not respond to emailed requests for comment Saturday.

Jacob’s abduction shattered childhood innocence for many in rural Minnesota, changing the way parents let their kids roam. His smiling face was burned into Minnesota’s psyche, appearing on countless posters and billboards over the years. Each year, Minnesota residents were asked to keep their porch lights on for Jacob’ssafe return.

Patty Wetterling always kept hope her son would be found alive. She became a national advocate for children, and with her husband, Jerry Wetterling, founded the Jacob Wetterling Resource Center, which works to help communities and families prevent child exploitation. In 1994, Congress passed a law named afterJacob Wetterling that requires states to establish sex offender registries.

Officials with the Jacob Wetterling Resource Center posted a statement on its website Saturday, saying they are in “deep grief.”

“We didn’t want Jacob’s story to end this way,” the statement said. “Our hearts are heavy, but we are being held up by all of the people who have been a part of making Jacob’s Hope a light that will never be extinguished. … Jacob, you are loved.”