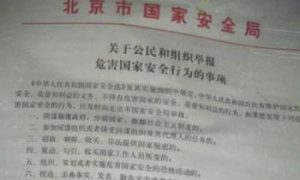 Poster Urges Chinese to Spy on One Another
0
US

“New York is the number one target on terrorists’ list for all terrorists around the world who want to harm Americans, but the city has a severely limited capability to communicate with federal agencies and is unable to communicate with first responders outside of New York City at all on a interoperable network,” said Sen. Gillibrand.

The officials urged Congress to pass the Public Safety Spectrum and Wireless Innovation Act before the 10th anniversary of the 9/11 attacks in September. The bill, if successfully passed, will enable the allocation of a radio spectrum for New York City police to communicate with law enforcement agencies across the country on the same frequency as they respond to emergencies. It will also help install more advanced devices with the possibility for live data sharing between the police and instant access of the criminal’s information as detailed by past record of arrests, digital snapshots, and addresses.

“The fact is that a 16-year-old with a smartphone has more advanced communication capability than a police officer with one of these [police] radios. The technology that is out there and the complexity of the threat that we face simply make this unacceptable,” said Commissioner Kelly at the press conference.

Currently, the two-way voice radio speakerphones that cops use do not allow the exchange of digital data and lack a mutual spectrum to communicate timely and seamlessly with first responders outside of the city.

Sen. Gillibrand is confident that once the bill is passed, new devices should be in place within two years. The new broadband network will also provide voluntary incentive spectrum auctions, which will help the bill fund itself.

“It is not a Democratic or Republican idea, it is just a good idea,” said Sen. Gillibrand, a Democrat.

Since the 9/11 attacks, the city has made efforts to incorporate innovative technology for emergency responders, including the installation of more closed circuit televisions and subway cameras, license plate reader technology used to track down cars, as well as radiation detection sensors, according to the NYPD.