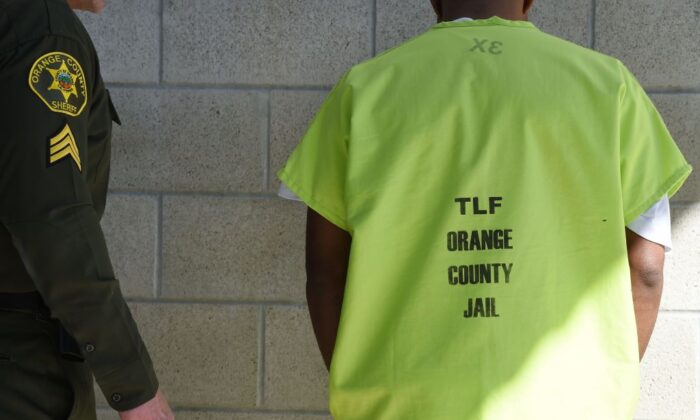 A file photo of a detainee at the Theo Lacy Facility, a county jail in Orange County, Calif., on March 14, 2017. (Robyn Beck/AFP via Getty Images)
Southern California

Officials in Orange County, California, are outraged after a Superior Court judge ordered Sheriff Don Barnes to release 50 percent of the inmates at county jails due to a COVID-19 outbreak.

The order to release half of the county’s inmates was issued by Orange County Superior Court Judge Peter J. Wilson Dec. 11 after a lawsuit was brought in front of the court by the American Civil Liberties Union (ACLU) on behalf of inmates who claim to be at high risk of COVID. The plaintiffs in the case include jail inmates who are medically vulnerable or suffering from significant underlying health conditions.

After the order was mandated, Barnes issued a statement to the community on Dec. 11 noting that the order would result in 1,800 potentially dangerous criminals being released onto the streets.

Congresswoman-elect Steel, who recently defeated incumbent Harley Rouda for the 48th District seat at the U.S. House of Representatives, called the mandated release of inmates “unnecessary” and said it “does more harm than good.”

“Orange County has been implementing proper safety measures to protect our inmates from the virus,” Steel said in a Dec. 13 press release. “Under Sheriff Barnes leadership, there have been zero deaths in OC jails and only three hospitalizations.”

“As Chairwoman of the Orange County Board of Supervisors, it is my number one priority to ensure the public safety and security of the people of Orange County,” she said.

“This reckless order to release 50% of the jail population, over 1,800 inmates, onto the streets of Orange County, many of whom are pre-trial or have been convicted of violent crimes, threatens our safety and will endanger our communities.”

DA Spitzer said the judge’s ruling jeopardized the residents of the county.

“A judge’s ruling to reduce the inmate population in the Orange County jail system by half will release dangerous and violent criminals back into our neighborhoods to commit more crimes and victimize more people,” Spitzer said in a Dec. 12 press release.

“This is not fearmongering; it is a fact.”

Sheriff Barnes said his department was evaluating potential options regarding the order.

“We have received an order from the court in a case regarding COVID-19 in the Orange County jails. The order mandates a significant reduction of the jail’s inmate population. We are evaluating the order, its impacts and our options for appeal,” Barnes said Dec. 11.

“Many of these inmates are in pre-trial status for, or have been convicted of, violent crimes and will be released back into the community. This order puts our community at substantial risk and does not take into account the impact on the victims of these crimes.”

Prior to the mandate, Barnes noted Dec. 10 that the county jail system had 102 virus-positive inmates, despite consistent testing of individuals and new bookings undergoing a 14-day quarantine period. The total was updated to 138 cases on Dec. 11. Of those, 27 were newly booked inmates and 111 were in the general population.

Spitzer said that since the beginning of the pandemic, the county jail population had already decreased by more than a third. The DA also noted that inmates released on a controversial $0 bail policy—applied to low-level felonies and misdemeanors—saw a recidivism rate nearly three times higher than typical, including a man who stabbed and killed his ex-girlfriend.

“These are not just new crimes. These are new victims,” he said.

Some of the other crimes committed by inmates released early in the past because of the pandemic include auto theft, robbery, assault, burglary, weapons violations, theft, and narcotics.

Spitzer said, “The solution is simple: don’t break the law, and you won’t end up in jail.”

He said that if Sheriff Barnes appeals the ruling, the DA’s Office will file an amicus brief with their statistics in order to demonstrate how dangerous they believe the decision to be.

“Inmates who were let out before serving their full sentence—many who are medically vulnerable —were determined to be the lowest risk—and they still went out and committed more crimes at alarming rates,” Spitzer said.

The judge, who ruled based on a lack of social distancing for vulnerable inmates, said Barnes has options other than releasing inmates.

Corene Kendrick, an attorney for the ACLU, said the sheriff could use ankle monitors, home confinement, and monitoring. She argued that earlier this year when sheriffs were ordered to reduce jail populations across the state, “it’s not like crime soared.”

“The point is, and I think the judge got this, there’s a bigger public safety risk of having an outbreak of COVID-19 in the jail system when the county’s hospitals are already at the breaking point with skyrocketing infections,” Kendrick said.

“You really don’t want a bunch of incarcerated people coming into the hospitals. It’s a giant production. Everyone has to come with an officer. It becomes a strain on the community hospitals that is not needed.”

Barnes said that it’s still possible for his department to get the burgeoning COVID cases under control.

“As we have successfully done before, we will implement multi-layered mitigation efforts to control the further spread of COVID-19 among inmates or personnel,” he said in a Dec. 10 press release.

“Throughout the pandemic, we have gone beyond CDC [Centers for Disease Control and Prevention] guidelines and increased testing for inmates and employees. I am confident that the practices and procedures we have implemented in previous cases will bring cases back down to zero as we have before.”

It wasn’t clear when Barnes would need to reduce the jail population. Judge Wilson mandated a report by year’s end, and a status hearing has been scheduled for Jan. 8, 2021.