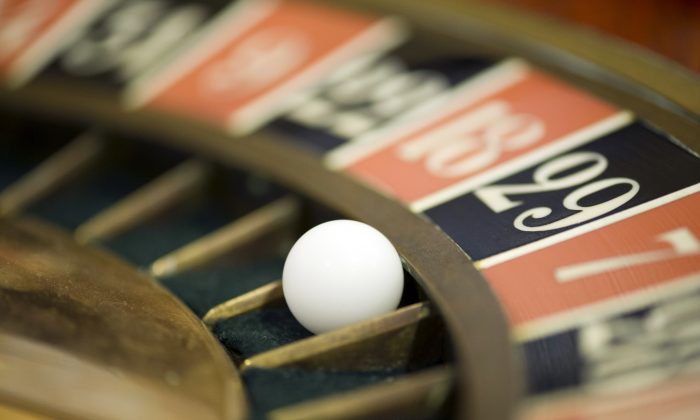 A roulette table is pictured in the Cerus Casino Academy, a school for croupiers in Paris, on February 27, 2013. (Lionel Bonaventure/AFP/Getty Images)
US

Officials Order Fantasy Sports Sites to Shut Down in Nevada

LAS VEGAS—Daily fantasy sports sites have been dealt a setback with Nevada regulators ordering them out of the state unless they get a gambling license — a decision that’s likely to be closely watched by other states that allow gambling.

DraftKings and FanDuel — sites that have insisted they aren’t gambling and have promised to make millionaires out of sports fans — both pulled out of Nevada by Thursday evening.

That day’s decision from the Nevada Gaming Control Board allows for daily fantasy sports in the state as long as the operator has or gets a gambling license. No one operating a daily fantasy site has one.

“If you’re licensed in Nevada, you’re good to go,” said A.G. Burnett, chief of the state’s Gaming Control Board. That includes traditional sports books where gamblers generally wager on the outcome of a given game.

The decision comes amid growing backlash by regulators and investigators, including New York’s attorney general, after it was revealed employees often played on competing sites, raising questions about possible insider information being used to win.

Nevada regulators govern the country’s main gambling hub in Las Vegas, and their actions could hold sway with regulators elsewhere.

In less than two weeks, the two high-profile companies in the ever-growing industry had gone from being a seemingly unstoppable, untouchable force to facing intense scrutiny of their business practices and legality from investigators, lawmakers, regulators and even their own players.

“We understand that the gaming industry is important to Nevada and, for that reason, they are taking this exclusionary approach against the increasingly popular fantasy sports industry,” the statement said. It mentions the company had thousands of customers in Nevada but didn’t provide an exact amount.

FanDuel said it was disappointed regulators decided that only existing casinos in Nevada could offer fantasy sports.

“This decision stymies innovation and ignores the fact that fantasy sports is a skill-based entertainment product loved and played by millions of sports fans,” the statement said. “We are examining all options and will exhaust all efforts to bring the fun, challenge and excitement of fantasy sports back to our Nevada fans.”

Participants on the unregulated sites can compete in games involving professional or college sports, paying an entry fee that goes into a larger pool. They try to assemble teams that earn the most points based on real-life stats in a given period with a certain percentage of top finishers earning a payout.

The Nevada Gaming Control Board determined that daily fantasy sports, “involves wagering on the collective performance of individuals participating in sporting events,” making it a sports pool and requiring a gambling license in the state.

The decision didn’t appear to affect season-long fantasy sports but the definition could be used to describe those sites, too, that accept wagers or fees to play.

The fantasy sports industry has argued the sites provide games of skill and not chance and are therefore protected by the 2006 Unlawful Internet Gambling Enforcement Act, which carved out a specific exemption allowing fantasy sports.

Clinton Has Edge in Nevada, Site of Dems’ First Debate

The distinction has been an important one for the industry, which has dodged the type of regulation that governs traditional casinos and sports books. Avoiding being labeled “gambling” also has made the contests palatable to professional sports leagues that have partnered with the sites or, in some cases, invested directly.

Seth Young, chief operating officer of the much smaller site Star Fantasy Leagues, said he took it a step further than most, commissioning the same lab that tests casino slot machines to determine if the site’s games were skill-based. Young said the tests confirmed it, but “it doesn’t mean we can disrespect state laws.” He noted his company pulled out of 10 states before Thursday, to stay on the right side of the law. His site pulled the plug in Nevada, too.

“We saw regulation on the horizon,” he said, adding he hopes to return.

Daniel Wallach, a sports law expert from Florida, said the board’s decision is not going to “cause an extinction of fantasy sports from Nevada, forevermore.” But it confirmed what Wallach and other observers familiar with the gambling industry have long contended.