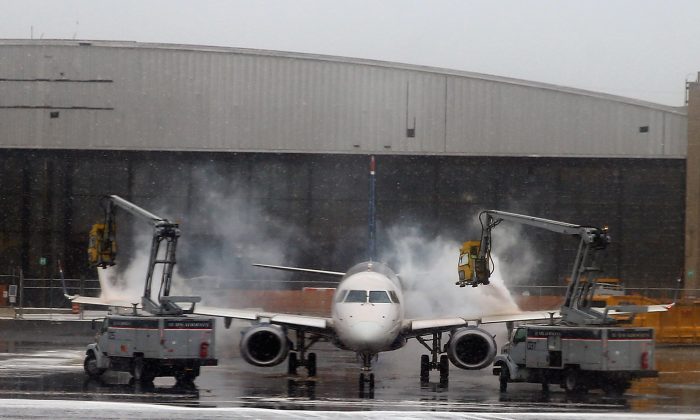 A US Airways jet is de-iced prior to takeoff at Laguardia Airport on January 26, 2015 in New York City. (Photo by Bruce Bennett/Getty Images)
New York

NEW YORK—Officials say a terminal at New York’s LaGuardia Airport that was evacuated has been reopened after an abandoned vehicle was cleared.

Alana Calmi, a spokeswoman for The Port Authority of New York and New Jersey, says in a statement that Terminal B at LaGuardia was closed and passengers were evacuated late Thursday due to an abandoned vehicle near the terminal.

The vehicle was cleared a short time later.

The terminal was reopened after midnight Friday.

Passengers told the New York Daily News that amid the evacuation, officials wouldn’t elaborate. “People didn’t know where to go and we were all stuck there for hours,” said Mercedes Leon, 39. “We didn’t even know what was going on. People were just annoyed.”

Pictured is the abandoned car that sparked the lockdown at LaGuardia. The SUV has been towed away https://t.co/PNC4lxwpQI pic.twitter.com/F3JBMfojMx

An abandoned car prompted evacuations in a terminal at LaGuardia Airport https://t.co/dm0WR9StL6 pic.twitter.com/MxSabXs0h5

“Complete [expletive] show at LaGuardia,” tweeted Michael Cohen at around  11:15 p.m. “Kicked everyone out of lower level because of unattended vehicle. No info given; literally no way to leave.”