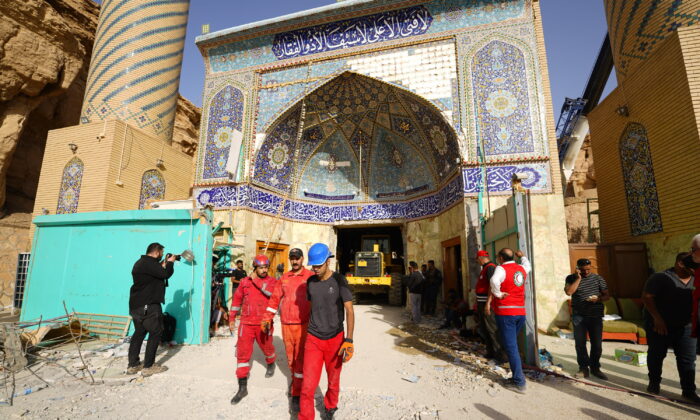 BAGHDAD—A landslide collapsed the ceiling of a Shiite shrine in central Iraq over the weekend and killed at least seven people, including a child, officials said Monday as rescuers continued to search for survivors.

The landslide struck Qattarat al-Imam Ali shrine near the holy city of Karbala, about 80 kilometers (50 miles) south of Baghdad, on Saturday.

According to Iraq’s civil defense, the landslide hit the ceiling of the shrine, which lies in a natural depression, causing it to cave in and dumping a torrent of rock and mud inside the structure. The entrance, walls, and the minarets of the shrine, which was built on the place of a water source in the desert, remained standing.

Among the dead were four women, two men, and a child, the civil defense said, adding that search teams had rescued six people. On Monday, rescuers were using a bulldozer to try to remove the rubble and search for survivors.

The cause of the landslide was not immediately known; the civil defense blamed high humidity. Nassif Gassim al-Khatabi, Karbala’s provincial governor, said Sunday the shrine area would be closed pending an investigation.

In 2019, at least 31 pilgrims were killed and about 100 were injured when a walkway collapsed and set off a stampede in Karbala when thousands of Shiite Muslims were marking Ashoura, one of the most solemn days of their religious calendar.

Iraq is mired in a months-long power struggle between rival Shiite blocs that has further weakened the country’s caretaker government and its ability to provide basic services.