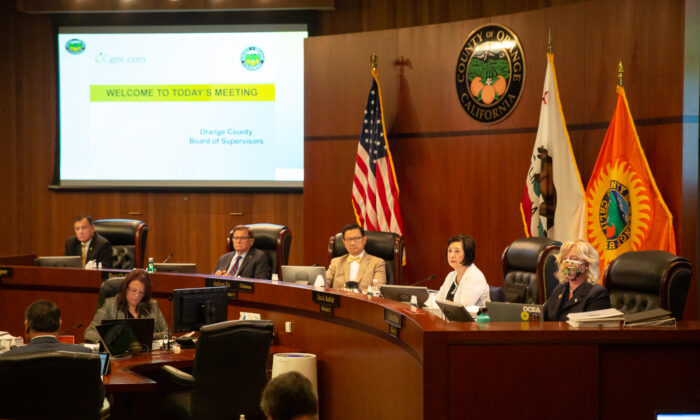 The Orange County Board of Supervisors listen to Orange County residents at a meeting in Santa Ana, Calif., on Aug. 10, 2021. (John Fredricks/The Epoch Times)
Southern California

SANTA ANA, Calif.—After weeks of contentious debate among county education officials regarding voting maps, the Board of Supervisors granted the county Board of Education autonomy to adjust its district boundaries on Feb. 1.

The Board of Education was granted voting map autonomy instead of the 11 appointed members on the Orange County Committee on School District Organization—the committee in charge of approving and submitting the final district maps.

“We [need to] make sure that the registrar of voters knows … it remains our intent to keep the policymakers in charge,” Vice Chair Don Wagner said. “They should draw the maps and their maps should prevail, as long as it satisfied all the other requirements.”

Wagner, along with supervisors Andrew Do and Lisa Bartlett, voted in favor of the elected education trustees. Meanwhile, Chairman Doug Chaffee and Supervisor Katrina Foley rejected the resolution—refusing to get involved in the dispute.

“I was surprised when I saw this resolution on our agenda since we really have no authority over the matter,” Katrina Foley said. “It’s a slippery slope, one we’re starting to weigh in.”

The unresolved brawl on the county Board of Education district boundaries led the board to sue the Orange County Committee on School District Organization on Jan. 21. However, the lawsuit failed to be granted an emergency order 10 days later as a judge ruled in favor of the committee’s authority to adjust district boundaries.

The legal matter will undergo a hearing in May, and if the ruling is overturned, the Board of Education will be able to create a different map for the 2024 or 2026 election cycle, county attorney Leon Page said during the meeting.

According to the lawsuit, the committee’s role was to merely review and verify the map approved by the Board of Education on Dec. 8. However, the committee submitted an entirely different map to the Orange County Registrar’s Office before the Feb. 2 deadline.

“The committee redrew new district boundaries that would kick the board members out of their current districts and make them compete with one another during reelection periods,” Board President Mari Barke told The Epoch Times in a previous interview.

According to Jeffery Riel, an advisor for the Orange County Committee on School District Organization, the committee is authorized to adjust trustee boundaries.

While the Board of Supervisors approved the resolution, there is no provision in the law that provides the board with the authority to direct the county Board of Education redistricting process, Riel said.

Over 30 public speakers urged the board to support the resolution that would grant elected Board of Education trustees’ redistricting rights.

“The elected officials should be accountable to voters,” a county resident said. “I had never heard of this county committee before all of this happened.”