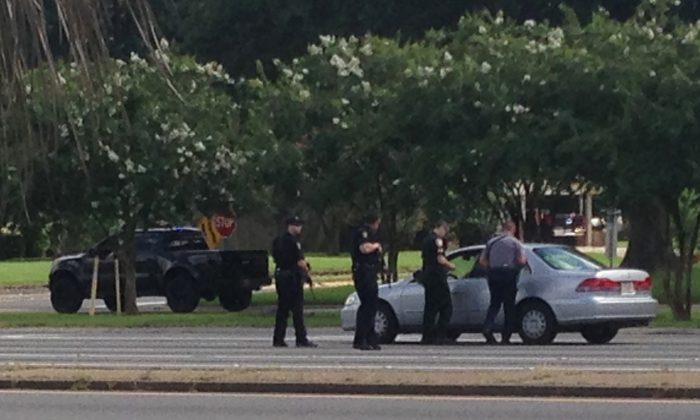 Three officers have been killed and three more wounded in Baton Rouge, Louisiana, after a shooter opened fire in an ambush-style attack on police.

Louisiana state and local officials gave a full rundown during an afternoon press conference of the Baton Rouge shootings that occurred on Sunday, July 17.

Colonel Mike Edmonson, superintendent of Louisiana State Police stressed that though the investigation is ongoing, there are no more active shooters, as the suspect who shot and killed the police was believed to have been the suspect shot at the scene.

“Understand, this investigation has got a lot of moving parts and pieces. We’ll be moving and going on each one of those, but right now, there is no active shooter scenario going on in Baton Rouge,” he said.

Edmonson also gave a full timeline of the events of the incident while stating that any information received outside of him, Baton Rouge Police Department (BRPD) chief  Carl Dabadie, and East Baton Rouge Parish Sheriff’s Office (EBRSO) sheriff Sid Gautreaux cannot be confirmed as factual.

8:40 am: Baton Rouge police department officers at a convenience store observed an individual wearing all black standing behind a beauty supply store holding a rifle.

8:42 am: Reports received of shots fired.

8:44 am: Reports received of officers down on the scene.

8:45 am: Reports received of more shots being fired.

8:46 am: Reports received of the suspect, wearing all black, standing near a car wash located right next to the convenience store.

He asks the public to stay vigilant, and to report any suspicious activity.

Officers killed or injured in the incident include officers from the East Baton Rouge Parish Sheriff’s Office (EBRSO) and the Baton Rouge Police Department (BRPD).

On the side of the EBRSO is a deceased 45-year-old, a 41-year-old in critical condition fighting for his life, and a 51-year-old with non-life threatening injuries and currently undergoing surgery.

Baton Rouge mayor Kip Holden and Louisiana governor John Bel Edwards also made appearances, offering their condolences to families of the fallen officers and to the community.

Louisiana governor John Bel Edwards also condemned the “senseless violence” while calling the incident an “absolutely, unspeakable, heinous act.” He said multiple federal agencies are assisting local agencies in the investigation, and that the investigation will not stop until all perpetrators have been brought to justice.

“An attack on one of us is an attack on all of us. And the people who carried out this act—the individuals, they do not represent the people of Baton Rouge, or the state of Louisiana, or what’s best about our country. They do not represent the values we stand for. Obviously our community is hurting, and only through peace and unity can we heal. And that’s going to take constructive dialogue. There simply is no place for more violence,” said Edwards.

Questions were not taken at the press conference.