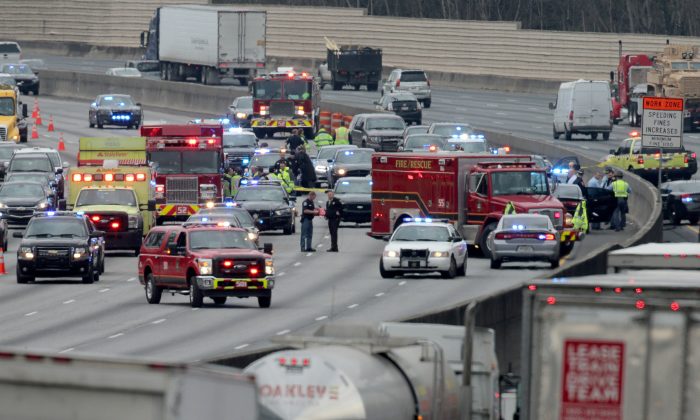 Police work at the scene of an officer-involved shooting on I-75 in Cobb County on Wednesday, Jan. 27, 2016. (Ben Gray/Atlanta Journal-Constitution via AP)
Crime and Incidents

MARIETTA, Ga.—A state trooper and a driver who led him on a chase on a highway in suburban Atlanta both suffered gunshot wounds after exchanging fire Wednesday afternoon, a Georgia State Patrol spokesman said.

Trooper Jacob Fields was patrolling Interstate 75 southbound in Cobb County shortly after 3:30 p.m. when he saw a black Chevrolet Silverado traveling at a high rate of speed, State Patrol spokesman Capt. Mark Perry said. Fields recorded the pickup truck going 98 mph and when he tried to pull the Silverado over, the driver fled, Perry said.

The driver of the Silverado got out of the truck holding a handgun and began shooting at the troopers; Fields and two other troopers returned fire, Perry said. Fields was shot in the leg and abdomen just below his vest and above his gun belt, Perry said, but the three-year veteran was alert and in stable condition, with family around him.

Perry didn’t speak to Fields but said he heard the trooper speaking to his family: “He sounded very lucid, very awake, very alert, and he was very coherent and speaking, explaining what happened.”

Fields is expected to remain in the hospital for two or three days.

The driver of the Silverado was hit multiple times in the abdomen area and was in intensive care after undergoing surgery, Perry said. The man’s name or any other details about him were not immediately released.

Marietta Police spokeswoman Brittany Wallace said the shooting caused all but two lanes of the busy highway to shut down.

The southbound lanes were completely blocked off for several hours with numerous police cars, firetrucks and an ambulance parked at the scene. Police diverted traffic off I-75 heading south to clear the way for the investigation.

Georgia Bureau of Investigation spokesman Scott Dutton said the agency is investigating the incident at the request of the State Patrol.