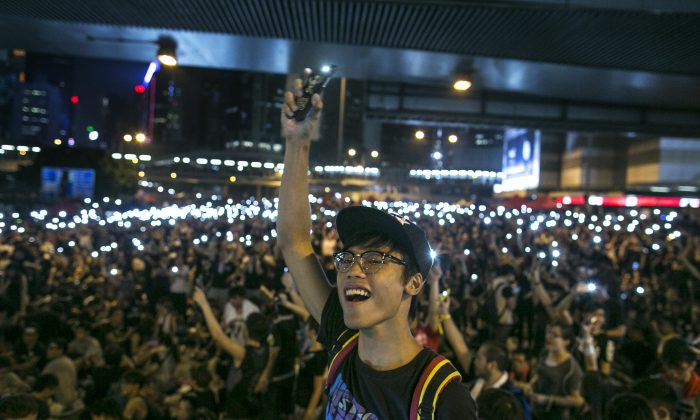 Officials From UN, Canada, and US Show Support for Democracy in Hong Kong

Officials from the United Nations, United States and Canada have all issued statements supporting democracy for Hong Kong.

Tens of thousands of unarmed Hong Kong protesters, many of whom are students, faced volleys of tear gas from Hong Kong riot police on Sept. 28–according to a statement by the police 87 canisters were fired into the crowd. This violent response to a peaceful demonstration has outraged people in Hong Kong and in countries around the world.

Although the spokeswoman of China’s Ministry of Foreign Affairs, Hua Chunying, called the Occupy Central protest an “illegal activity” and asked other countries to neither support the movement nor interfere in Hong Kong affairs, the spokespeople the UN general secretary, the U.S president and State Department, and the Canadian Ministry of Foreign Affairs took a different tack.

Aspirations of people of #HongKong are clear. Canada supports continued freedom of speech and prosperity under the rule of law.

“He [Ban Ki-moon] understands that this is a domestic matter, but urges all stakeholders to resolve any differences in a manner that is peaceful and safeguards democratic principles,” said UN spokesperson Stephane Dujarric.

The spokeswoman from the U.S. State Department, Jen Psaki, said on Monday, “We’re certainly watching the situation in Hong Kong closely.We support internationally recognised fundamental freedoms, such as freedom of peaceful assembly and freedom of expression around the world.”

“We believe that universal suffrage and the ability of the people of Hong Kong to have – that a genuine choice of candidates is something that they should have. That’s a concern we’ve expressed directly to China.” Psaki said.

White House spokesman Josh Earnest supported the demand for universal suffrage in a statement at the Monday press briefing. “The United States urges the Hong Kong authorities to exercise restraint and for protesters to express their views peacefully,” Earnest said, “The United States supports universal suffrage in Hong Kong in accordance with the basic law and we support the aspirations of the Hong Kong people.”

In Ottawa, Adam Hodge, press secretary of Canadian Foreign Affairs Minister John Baird said, “Canada’s position is clear. We are supportive of democratic development in Hong Kong and believe that the ongoing adherence to the ‘One Country, Two Systems’ policy has contributed to and remains essential for Hong Kong’s stability and prosperity.”

Hodge also posted on Twitter on Sunday, saying, “Aspirations of people of Hong Kong are clear. Canada supports continued freedom of speech and prosperity under the rule of law.”