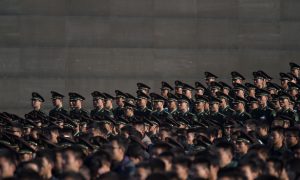 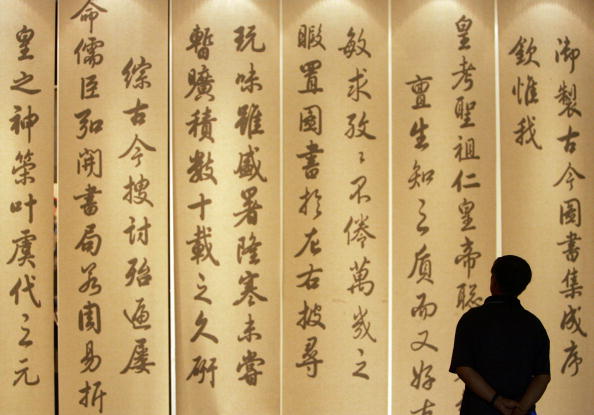 Playing the dual roles of a player and a referee is one way to get filthy rich, and many corrupt Chinese officials have resorted to such tactics as they amassed staggering wealth when they tried to become artists, art collectors, and directors of arts associations, according to the mainland Chinese news website China Economic Weekly.

“Some officials cannot even write regular script well. They go ahead and write in semi-cursive script, and then have their writing framed and give it to another as a gift,” said Wang Qishan, the head of the anti-corruption watchdog, the Central Commission for Discipline Inspection (CCDI), during a meeting on Jan. 13.

Wang was taking a jab at corrupt officials, singling them out for pretending to be calligraphy masters when they were not. Regular script and semi-cursive script are two different calligraphy writing styles, with the former considered to be more basic and easy to master.

“In some places, officials are so passionate about getting a position at the China Artist Association,” wrote an opinion article published by the CCDI website on Jan. 20. “In some provinces, it is simply stunning to see a dozen vice directors for a local calligraphy association.”

In the political bureaucracy of China, one often sees a political department or organization with multiple deputy-level officials, since promotion or holding of a certain position is not always tied to the skill or talent of a person, rather it is through bribery and personal favors.

In over ten provinces, including Hubei in the north, Henan in central China, Hebei in the east, and Hainan and Fujian in the south, the local calligraphy associations were headed by local officials, reported state-run People’s Net on Jan. 17.

Antiques, calligraphy, and paintings do not draw as much attention as houses or cars.

For corrupt officials, antiques, calligraphy, and paintings do not draw as much attention as houses or cars, according to China Economic Weekly. What’s more, sometimes it is hard to put an exact price on a piece of art since its authenticity may be hard to verify. Thus, any official in possession of artwork might have some leeway to defend himself if he ever comes under investigation.

In 2010, during the trial of Wen Qiang, former deputy chief of police in Chongqing in the southwest, one of the biggest debates was over the authenticity of one of the paintings in his possession—said to be the work of Zhang Daqian, considered one of the extraordinary Chinese artists of the twentieth century. If it were authentic, the painting would fetch a market price of 3.64 million yuan (about US$583 thousand)

Later, the State Administration of Cultural Heritage determined the painting was a forgery. As it turns out, the controversy over this painting was the least of Wen’s problems. He was eventually given a death sentence on a variety of charges including rape and protecting organized crime.

According to China Economic Weekly, art forgery plays a big part in how corrupt officials get payoffs.

In one scenario, an official might receive a piece of art from someone wanting to bribe the official, with the authenticity of the art being hard to verify. When the official puts the art up for auction, a mysterious buyer would immediately show up and purchase it at an extremely high price.

In another scenario, a person wanting to bribe an official would place a very inconspicuous vase at a market, and then the official could quickly snatch it up at a very low price, while knowing its real value might be 100 times or more.

CCDI has regulations in place to forbid officials from accepting antiques, calligraphy, and paintings.