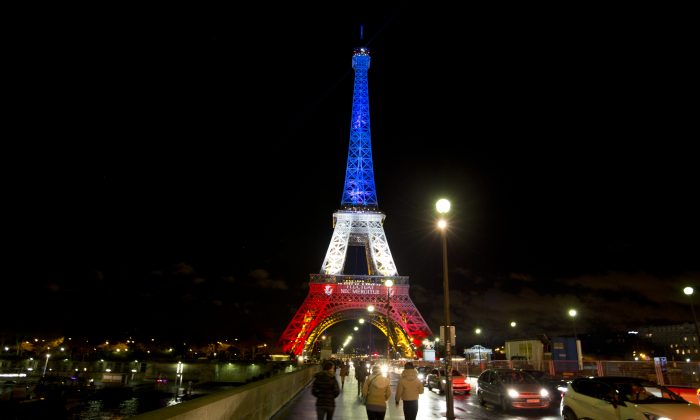 People walk towards the illuminated Eiffel Tower in the French national colors red, white, and blue on Nov. 17, 2015, in honor of the victims of Paris attacks of Nov. 13. (AP Photo/Peter Dejong)
Europe

Officials Discuss How to Coordinate Fight Against Extremism

THE HAGUE, Netherlands—Police, politicians and intelligence officials from more than 50 countries met Monday to discuss how to improve coordination in the fight against extremist violence and crack down on foreigners traveling to fight in conflict-torn countries like Syria and Iraq.

The meeting came two months after the Nov. 13 attacks in Paris, in which extremists took advantage of gaps in European intelligence as they plotted and executed the rampage that killed 130 people.

Dutch Foreign Minister Bert Koenders, who was chairing the meeting at European Union police organization Europol, said countries and crime fighters must build trust so they can work together far more closely.

“It is essential that our way of working matches much better that of the foreign terrorist fighters,” he told reporters ahead of the meeting of officials from the EU countries and other nations hit hard by extremists, including Somalia and Nigeria.

Salah Abdeslam and Mohamed Abrini, two fugitives in the Paris attacks, had appeared on a list of suspected Belgian extremists, but the list apparently was never widely shared.

Authorities say Abdeslam was able to crisscross Europe, pick up accomplices, rent rooms and cars, and buy detonators from a fireworks shop. He was even stopped by police and released again Nov. 14 because his name had not yet been linked to the attacks, even though he rented apartments in the Paris area and a car under his name.

Abdelhamid Abaaoud, the suspected planner of the attacks, was among the most wanted men in Europe, but French authorities were seemingly unaware until after Nov. 13 that his first cousin, with whom he was in close contact, was living in the Paris region.

The cousin, Hasna Ait Boulahcen, was tapped in an unrelated drug investigation, but it was Moroccan intelligence that pointed French authorities to the apartment in Saint-Denis where the cousins were hiding out with an accomplice. They died in a raid there.

Koenders warned that the extremist organizations are constantly evolving — pointing out that Paris attackers sometimes used computer games consoles to communicate — and law enforcement and intelligence agencies must work together to keep ahead of them.

“We have made agreements, but it’s very important right now that those who make the agreements and those who do the work build the trust to make sure there’s a real time exchange of information,” he said.