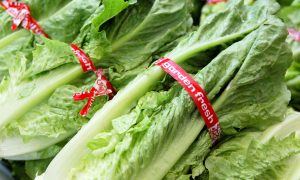 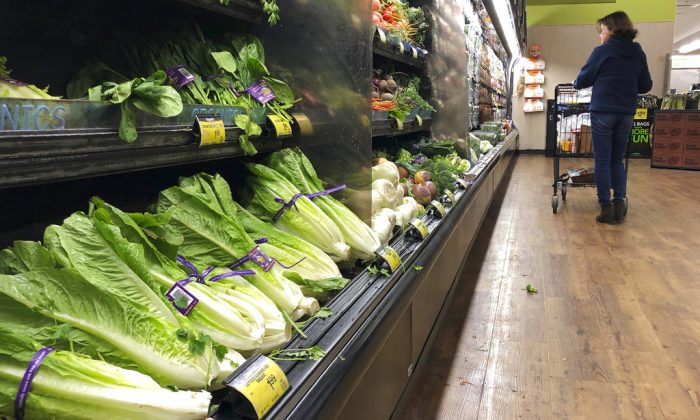 Romaine lettuce sits on the shelves as a shopper walks through the produce area of an Albertsons market in Simi Valley, Calif., on Nov. 20, 2018. (Mark J. Terrill/AP File Photo)
US News

The Centers for Disease Control and Prevention (CDC) said on Jan. 9, that the outbreak that was reported across 16 states and the District of Columbia appears to be over and that contaminated romaine should no longer be available on the market.

Sixty-two people were sickened by the outbreak between October and December last year. No deaths were reported but two people developed a type of kidney failure from eating the contaminated lettuce. Illnesses were also reported in Canada as well.

Officials traced the likely source of the outbreak to the central coastal growing regions of northern and central California. They found the strain of bacteria in the sediment collected from a water reservoir on a farm in Santa Barbara County. The farm, Adam Bros. Farming, subsequently recalled (pdf) its green leaf lettuce, red leaf lettuce, and cauliflower harvested after Thanksgiving. Lettuce from the farm linked to the outbreak is no longer available for sale.

The Food and Drug Administration (FDA) said that they will continue investigating potential sources and contributing factors that led to the outbreak in order to prevent future outbreaks.

Industry to Step Up Safety

Recently, there have been repeated food poisoning outbreaks linked to romaine lettuce in the United States, prompting the produce industry to look into its safety measures to prevent, catch, and contain contamination.

The outbreak that was announced before Thanksgiving last year followed another outbreak in June which sickened more than 200 people and killed five. In 2017, another E. coli. outbreak linked to leafy greens sickened 25 and killed one.

The dozens of reported cases of illness highlight the challenge of eliminating risk for vegetables grown in open fields and eaten raw, and the delay of stricter federal food safety regulations.

A contested aspect of the regulation, for example, would require testing irrigation water for E. coli. The FDA put the measure on hold when the produce industry said such tests wouldn’t necessarily help prevent outbreaks.

In the earlier 2018 outbreak, the bacteria was traced to romaine from Yuma, Arizona where testing of generic E. coli. in the water already occurs. The produce industry says the failure to prevent the Yuma outbreak could reflect the limitations of testing water for generic E. coli.

Elizabeth Binh, a food science expert at Cornell University, said the tests look for the amount of fecal matter in water. She said the problem is “some feces has pathogens in it, some feces doesn’t.” Binh is part of a federal program helping farmers comply with the new produce regulations.

The food science expert added that testing for specific E. coli strains that are harmful is more difficult, and it doesn’t rule out the possibility of other harmful bacteria.

Additional regulations on sanitation for workers and equipment—other potential sources of contamination—only recently started being implemented.

Meanwhile, FDA Commissioner Scott Gottlieb said last year that the leafy greens industry has agreed to establish a task force to find solutions for long term labeling of romaine lettuce and other leafy greens to mitigate any outbreak’s risk and to put in place standards for traceability of product.

The labels will identify the origin of the romaine lettuce based on harvest region, along with the date of harvest. The agency said this would help to limit the amount of product to be removed from the market and it will help consumers, restaurants, and retailers determine that the romaine lettuce they are buying is from an unaffected growing region.