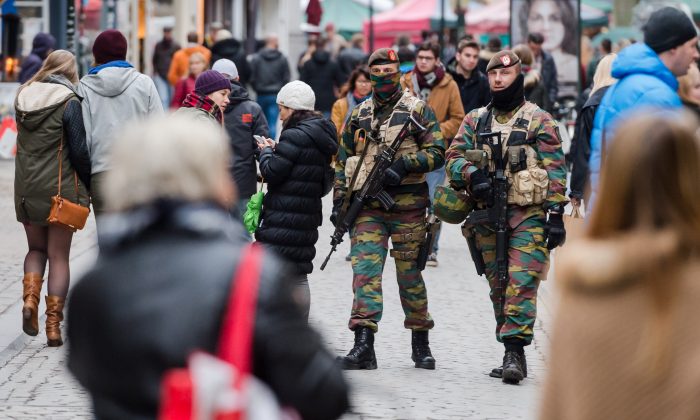 Soldiers from the Belgian army patrol in the picturesque Grand Place in Brussels on Friday, Nov. 20, 2015. Salah Abdeslam, a French national who lived in Molenbeek, Belgium, is currently the subject of an international manhunt after the Paris attacks. Security has been stepped up in parts of Belgium as a precaution. (AP Photo/Geert Vanden Wijngaert)
Europe

An emergency meeting of European Union interior ministers this week included discussion of creating the European equivalent of the CIA following the Paris terror attacks.

The meeting in Brussels included talk of creating a new agency to try to close gaps that failed to stop the attacks.

“A European equivalent of the CIA could be founded to bring together 28 member states’ intelligence following the Paris attacks,” according to The Independent.

“Numerous failings have been identified since the massacres that killed 130 people a week ago today, driving calls from the European Commission for increased co-operation through a joint agency.”

The exact source of this discussion seems to be Guy Verhofstadt, the leader of the liberal ALDE group in the European Parliament.

Euractiv reported that he urged officials that he creation of a European intelligence agency, as well as a corps of European border and coast guards, is more urgent than ever with the terrorist threat growing.

“Cooperation between the EU’s intelligence services is a failure. After each tragedy, we realize that our cooperation doesn’t work,” he said.

“So we either have to make a mandatory system of exchange between national intelligence services, or create a European structure.”

The proposal is set to be examined at the last European Council of the year, in December. Right now Greece and Sweden are opposed to the idea.

“But these decisions have to be made. How many tragedies do we have to suffer before we make them?” Verhofstadt asked.

Not everyone is on board with the idea of the creation of a new security agency, despite notable gaps in countries’ intelligence agencies–made worse in many cases by the flood of refugees and migrants from Syria and other countries.

Björn Fägersten, a research fellow at the Swedish Institute of International Affairs specializing in international intelligence cooperation and European affairs, said in a post on the New York Times that people should resist the calls for such an agency, noting that cooperation among European intelligence and security services has developed a lot over the last 15 years.

“History shows that European intelligence cooperation works best when the practitioners themselves identify a need, and when sufficient levels of trust exist between partners. Top-down political creations – such as a new European F.B.I. or C.I.A. – would create a paper tiger, with too few resources of its own, and undermine national responsibility for national security, which is still a member state prerogative,” he said.

“Rather than new designs, member states should focus on using what is already in place. They also need to make some forward-looking investments like ensuring that countries really use the Schengen border system for tracking incoming and outgoing individuals and Europol’s database for flagging suspects. Finalizing long-drawn discussions on passenger name records and data rendition and making better use of the E.U.’s separate resources – such as its 140 delegations abroad – to draw a better picture of terrorist threats would also help.”

The meeting also featured definitive action in the form of higher security within the Schengen area–or the 26 country free-travel zone that previously had minimum border control at common, or internal, borders.

Luxembourg justice minister Etienne Schneider, who chaired the emergency meeting, said quick and strengthened action “is not an option but an obligation.”

French interior minister Bernard Cazeneuve had before the meeting also called for tightened security at the external borders of the Schengen area, noting: “Terrorists are crossing the borders of the European Union.”

Under the new guidelines, all European Union citizens entering or leaving the free-travel area will undergo “systematic” screening against pan-European databases, reported the Guardian.

The border clampdown took effect immediately after passing on an undetermined temporary basis.

The ministers said in a joint statement that they want to devise new permanent rules while the temporary guidelines are in place.

Following the Charlie Hebdo terrorist attacks early this year, a similar border control effort was made but was ultimately unsuccessful. However, the CIA proposal appears to be entirely new.