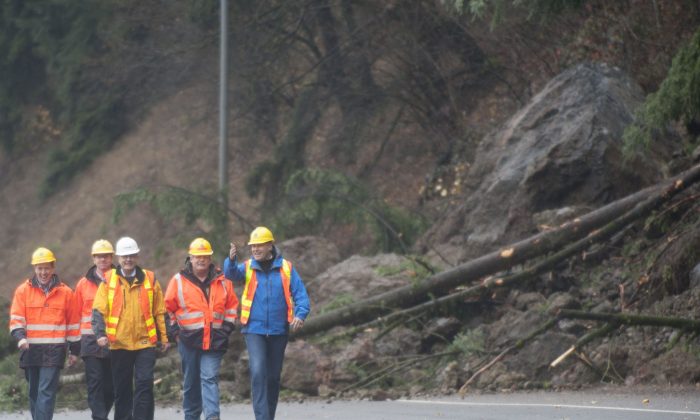 Washington Gov. Jay Inslee, right, is briefed by department of transportation officials as they survey the scene of a mudslide obstructing the northbound lane of Interstate 5 near Woodland,, Was., Thursday, Dec. 10, 2015. Boulders, trees and dirt slid onto the highway in the day before following heavy rains. (Natalie Behring/The Columbian via AP) MANDATORY CREDIT
US

SEATTLE  — The latest on heavy rains in the Pacific Northwest (all times local):

National Weather Service officials in Portland have confirmed a tornado touched down Thursday morning in the southwest Washington city of Battle Ground.

Some of the tornado damage in Battle Ground, WA pic.twitter.com/hkMUPNiptY

They are still determining the tornado’s intensity rating.

Jefferson Fire District spokeswoman Tammy Robbins says renter Maria Lugo awoke to the sound of what she thought was pounding rain or hail. When she looked out the window, she saw flames.

Lugo and five relatives — three of them children — escaped as flames engulfed the house. A Chihuahua named “Angel” and a bird named “Blue” did not make it out.

Firefighters needed 2 ½ hours to get the fire under control Thursday morning.

The National Weather Service says a two-person survey team is heading out to check on reports about a possible tornado touching down in southwest Washington.

Hydrologist Andy Bryant in Portland, Oregon, says the team will determine if damage reported Thursday in the city of Battle Ground was caused by a tornado or just high winds.

He says the area that includes southwest Washington and northwest Oregon typically sees about one tornado a year. The tornados tend to be short-lived and relatively weak compared to tornados in other parts of the country.

A woman who was stuck in a car behind the landslide on Interstate 5 took a scary mountain detour to get her 6-year-old grandson and his other grandmother back home Wednesday evening.

Diane Smith of Lacey, Washington, says she was directed off the freeway south of the landslide about 26 miles north of Portland, Oregon, after spending nearly three hours stopped on the interstate.

Because there were no signs telling her where to go once she left the freeway, Smith made a choice that led her to the steep, winding Green Mountain Road above Woodland, Washington.

The Washington Department of Transportation is not recommending people take that mountain road without guardrails to get around the landslide. But Smith said she did not know. She says five cars were following her and she was thankful when she got back down the other side and drove back onto I-5 again north of the slide.

She says she was scared and her ears were popping and she wasn’t sure she was going the right way until she made it back to the freeway.

Her grandson declared the experience an adventure to remember.

Oregon State Police identified a woman who died when a car became submerged in a flood near her home as 72-year-old Penny Forrest.

The woman was a passenger in a Jeep Grand Cherokee driven by her husband, Richard Forrest. Police say the 82-year-old driver went around a “road closed” sign at Lost Creek Road and Highway 30 in Clatskanie (KLATS’-kuh-neye).

The road had been closed because of this week’s flooding. The vehicle stalled in high water and eventually became submerged.

Richard Forrest escaped, but his wife could not.

It’s unclear if Forrest will be cited for going around the road closure. Lt. Bill Fugate (few-GAYT’) says the investigation is not over.

Clatskanie is a town with fewer 2,000 residents. It’s 60 miles northwest of Portland.

The rain is tapering off in western Washington, but forecasters at the National Weather Service say mudslide danger remains high and flooding is possible on the coast and along inland waters where high waves are expected.

Forecaster Kirby Cook says the strong weather systems are over for now, but people can expect steady rain of the usual winter variety over the weekend.

Cook says the threat of additional significant rainfall has ended and rivers will likely go off flood stage on Thursday.

Along the coast, waves as high as 30 feet were expected on Thursday. A coastal flooding watch is in effect until 1 a.m. Friday.

Western Washington weather is expected to return to a cooler, drier pattern early next week.

Meteorologist Jon Bonk said Thursday that cities from Portland to the coast got two-tenths to a half-inch of rain overnight, and river levels should remain flat or recede.

A parade of storms this week caused flooding, landslides and power outages.

Showers are in the forecast through the weekend, but Bonk says the region is out of the woods because the major storm has shifted south into California.

One concern, however, is the possibility of thunderstorms accompanied by wind gusts and perhaps hail. That could cause problems for those trying to restore power and cleanup flood damage.

Washington state officials say it could be hours before a single lane is reopened on a major northwest thoroughfare that was swamped by a massive landslide triggered by days of pounding rain.

Some trucks have been stranded since Wednesday afternoon in southwest Washington about 26 miles north of Portland, Oregon. A shelter has been set up for stranded motorists at Woodland High School.

The Washington Department of Transportation says there’s no estimate for when it can reopen northbound lanes of Interstate 5 — the state’s busiest roadway — near Woodland as rain soaks the already drenched Pacific Northwest.

The department said Thursday morning it’s working to get one lane open.