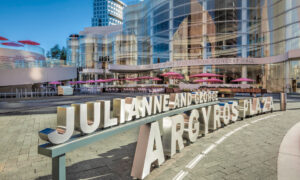 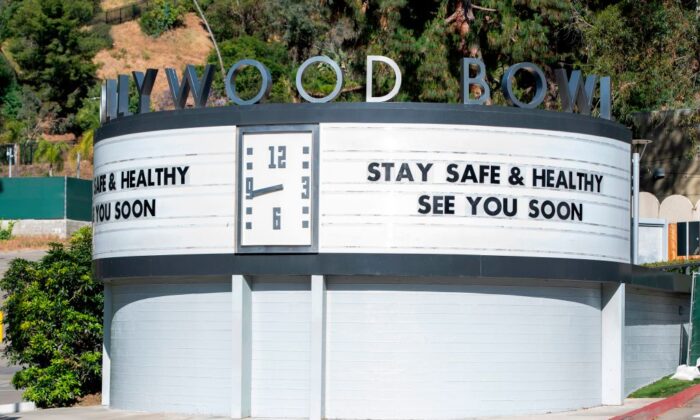 The entrance to the Hollywood Bowl in Los Angeles on May 14, 2020. (Valerie Macon/AFP via Getty Images)
Southern California

LOS ANGELES—The Los Angeles Philharmonic Association (LA Phil) April 9 announced plans for the reopening of its outdoor concert venues—the Hollywood Bowl and The Ford—for the 2021 season, starting with four free concerts for health care workers, first responders and essential workers as a gesture of thanks for their work throughout the pandemic.

Based on county Public Health guidance, the Hollywood Bowl will be able to welcome a limited-capacity audience of 4,000 people when concerts resume beginning in May. The LA Phil anticipates ramping up to greater capacity later in the summer as guidelines evolve.

In Los Angeles County, which recently advanced to the orange tier of the state’s Blueprint for a Safer Economy, outdoor venues are restricted to 33 percent capacity.

Beginning in July, the Bowl will present 14 weeks of concerts, including crowd favorites such as Fourth of July fireworks, Tchaikovsky Spectacular and Sing-A-Long Sound of Music.

The Ford’s season, featuring an array of local and regional Southern California artists and national acts, will open in late July and run for 15 weeks. According to the LA Phil, the Ford is committed to representing the county on its stage and in its audience will make 20 percent of its performances free to the public.

Detailed information on programming, dates and ticketing for the Bowl will be announced May 11 and for the nearby Ford amphitheater on May 25. An announcement concerning the reopening of downtown’s Walt Disney Concert Hall is expected in June.

“It’s not possible to overemphasize the incredible support we’ve seen across our community during this unprecedented crisis,” said LA Phil chief executive Chad Smith. “We’re looking forward to bringing our audiences back together with one another and with live music.”

Smith said that while the philharmonic was forced into budget cuts and dozens of layoffs after the Bowl’s season was cancelled last year, the organization is moving forward, hiring seasonal staff and implementing policies and procedures designed for the safety of returning audiences, artists and
staff.

Three of the first free concerts at the Bowl—made possible through a partnership with Kaiser Permanente—will include performances by LA Phil Music and Artistic Director Gustavo Dudamel and the orchestra, May 15 and 22, playing repertoire from Beethoven to Marquez, with artists to be announced for the third event on June 26.

The fourth free concert will be with local artists Thundercat and Flying Lotus on June 12, their first performance since winning a Grammy Award for best progressive R&B album earlier this year.

“I cannot describe the joy and hope that I feel at the thought of returning to the stage with our musicians, in front of a live audience,” Dudamel said. “We have found so many extraordinary and creative ways to share music together over the course of this pandemic, but truly nothing can take the place of performing in person. And nothing can compare to the magic of making music at the Hollywood Bowl, where the sound waves mingle with the soft breeze of a Southern California evening. My friends, we have missed you, and we cannot wait to share music in person again.”

Supervisor Sheila Kuehl, whose third district includes the Bowl and Ford, added: “This milestone in our recovery journey means that vocalists can start warming up, instrumentalists can start tuning up, and audiences can actually again make plans for a summer of inspired performances under the stars.”