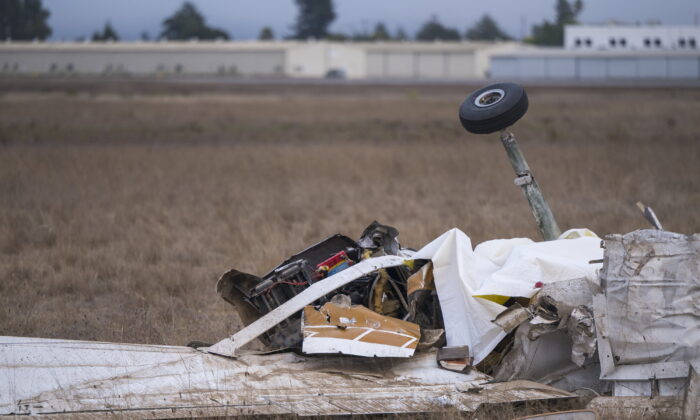 WATSONVILLE, Calif.—Three people and a dog were killed after two small planes collided in Northern California while trying to land at a rural airport, authorities said Friday.

The names of those killed after their planes crashed Thursday at the Watsonville Municipal Airport will be released once their families have been notified, the Santa Cruz County Sheriff’s Office said in a statement.

There were two people and a dog aboard a twin-engine Cessna 340 and only the pilot aboard a single-engine Cessna 152 during the crash, NTSB air safety investigator Fabian Salazar said.

The Federal Aviation Administration and the National Transportation Safety Board were investigating, the sheriff’s office said.

“We have what appears to be one aircraft operating in a traffic pattern and one aircraft coming into the airport to land,” Salazar said.

Salazar said investigators were still collecting evidence and will talk to witnesses. A preliminary report on the fatal collision from the NTSB is expected in two weeks, he said.

The city-owned airport does not have a control tower to direct aircraft landing and taking off.

Salazar said pilots that use airports with no control towers have a common traffic advisory frequency they use to communicate.

“We are working to get the radio communications that were occurring on that day,” he said.

The airport accounts for about 40 percent of all general aviation activities in the Monterey Bay area, according to the City of Watsonville’s website.

Watsonville, an agricultural town near Monterey Bay, is about 100 miles south of San Francisco.