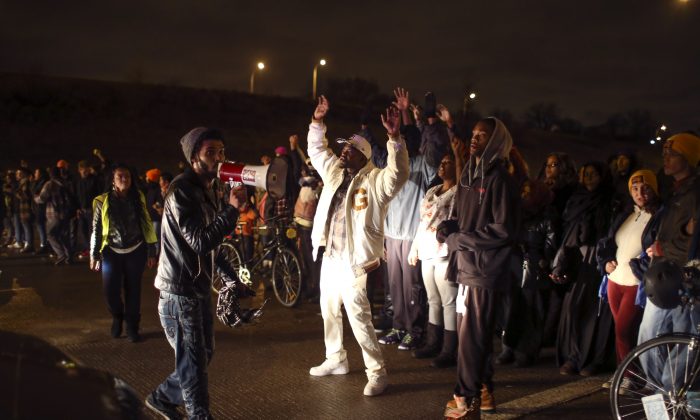 Demonstrators block a portion of Interstate 94, shutting down the northbound lanes in Minneapolis on Nov. 16, 2015. (Jeff Wheeler/Star Tribune via AP)
US

MINNEAPOLIS—State investigators looking into the fatal police shooting of a black Minneapolis man during a scuffle have several partial videos of the incident but won’t release them despite demands from protesters, an official said Tuesday, Nov. 17.

Jamar ONeal Clark, 24, died Monday evening, a day after he was shot by police during an early-morning dispute, the state Bureau of Criminal Apprehension (BCA) said Tuesday.

Some witnesses said Clark was handcuffed when he was shot, which police dispute. His death sparked protests including one Monday night in which hundreds of people blocked traffic on an interstate highway, leading to 42 arrests.

The BCA is investigating the case, but Mayor Betsy Hodges has requested a federal civil rights investigation. That satisfied one of the protesters’ demands, but investigators haven’t met two others: the release of any video and the identities of the officers involved.

Police said the incident began when they were called to north Minneapolis around 12:45 a.m. Sunday following a report of an assault. When they arrived, a man was interfering with paramedics helping the victim, police said. Officers tried to calm him, but there was a struggle. At some point, an officer fired at least once, hitting the man, police said.

BCA Superintendent Drew Evans said Tuesday that investigators have video from several sources, including an ambulance, a mobile police camera in the video, a public housing camera, surveillance video from an Elks Club across the street, and citizens’ cellphones.

None of the videos will be released while the investigation is ongoing because it could taint the probe.

At a brief news conference shortly after the BCA announced Clark’s death, Evans also said no police dash cam video existed. Authorities said earlier the officers weren’t wearing body cameras. Evans declined to release any identifying information about the officers, including their race, pending interviews with them in the next day or two.

Evans also confirmed that Clark had no weapon. Pressed on the timeline for results of the BCA investigation, Evans repeated that 2 to 4 months was typical but added the Clark case “has been given top priority.”

Clark’s brother, Jamine Robinson, 32, of Rochester, told The Associated Press earlier Tuesday that family members had gone to the hospital Monday evening to take Clark off life support. He said he didn’t go because he didn’t want to see his brother in a hospital bed.

“I want the officer to be arrested, prosecuted, and put in jail for eternity. Life without parole,” said Robinson.

In seeking the civil rights investigation on Monday, Hodges said she was concerned about “transparency and community confidence.” She expressed faith in the state investigation but said the city needs “all the tools we have available to us.”

Protesters have set up tents around the 4th Precinct station near where the shooting occurred and said they won’t leave until authorities release any video they have of the incident along with the officer’s identity.

The protests are just the latest expression of tension between the department and minorities in the city.

The rocky relations have led to discussions between police and minorities and the creation of task forces designed to quell concerns. This spring, Minneapolis was selected for a federal Justice Department program to rebuild trust between police and the communities they patrol.