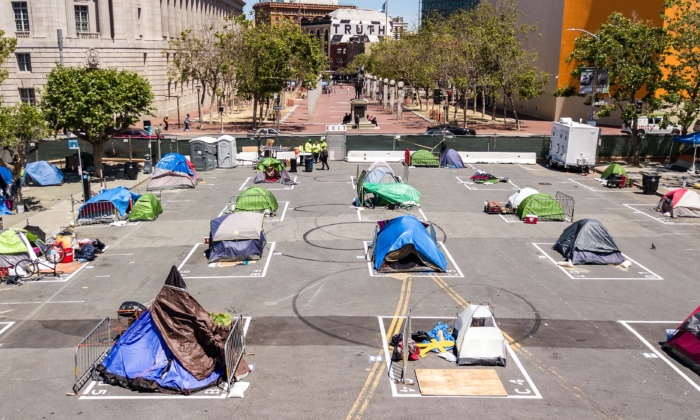 File photo: Rectangles are painted on the ground to encourage homeless people to keep social distancing at a city-sanctioned homeless encampment across from City Hall in San Francisco on May 22, 2020, amid the pandemic. (Josh Edelson/AFP via Getty Images)
Social Issues

The homelessness crisis in San Francisco has gotten markedly worse in recent years, and while some may try to blame the problem on the pandemic, official missteps at the municipal level have seriously exacerbated the crisis, experts say.

San Francisco Mayor London Breed has tried to alleviate the homeless problem in her city with funds obtained through Prop C, which passed in 2018—and which Breed initially opposed. Prop C levied a wealth tax on the richest corporations in the city with a view to generating funds to address homelessness.

The mayor has also been a strong proponent of “transitional housing,” or putting the homeless in hotels as a temporary measure on the way to finding more permanent arrangements. Many support the mayor’s efforts, and recently released preliminary figures show a slight—3.5 percent—decline in the total number of homeless people within San Francisco over the past three years, to roughly 7,800, in the context of a 9 percent rise in the Bay Area overall.

But a closer look at the issue reveals a different story and calls even the modest decline in San Francisco into question, observers and homeless advocates say. During the pandemic, the city’s policy of purchasing hotels and converting them into temporary hotels for the homeless bred conditions that provided neither a safe and stable environment for those who had been living on the street, nor an improved quality of life for people in the neighborhoods in question.

The hotels tended to turn quickly into dens for drug use, according to Zac Clark, executive director of The HomeMore Project, a San Francisco nonprofit focused on homelessness.

Clark’s first apartment in the city was at 449 O’Farrell Street. He moved in sometime in May 2020. The apartment was in the Tenderloin district just a few doors down from the Winton Hotel and the Super 8 hotel located at 445 and 415 O’Farrell Street, respectively. Clark said he vividly recalls what happened to the quality of life once the homeless were ensconced in these supposedly temporary shelters.

“I would often hear people yelling vulgar and inappropriate things from their windows as they were doing drugs. Hotels created the perception that the city was making progress on homelessness, when, in fact, they were taking many strides back,” Clark said.

Besides the failures of implementation, the city badly bungled its attempts to find longer-term arrangements for the homeless, in the view of Jennifer Friedenbach, executive director of the San Francisco-based Coalition on Homelessness. People living on the street, in many cases, were eager to find homes, but the city didn’t properly facilitate transitions, she said.

In Friedenbach’s view, the single biggest mistake the city made during the pandemic was to cut off housing access to people living on the street.

“And then the pandemic hit and the focus shifted to those in ‘Shelter in Place’ hotels, who were the only ones who could move into housing. The system had to start all over with the people in the Shelter in Place hotels, and vacancies skyrocketed as they tried to get their paperwork together. Meanwhile, folks were stuck outside without respite for two years and substance use skyrocketed alongside overdoses, and mental health deteriorated.”

In Friedenach’s analysis, the city’s decision to prioritize housing for the residents of Shelter in Place hotels made an already severe crisis even worse, when there were so many desperate homeless people with worsening mental health and substance abuse problems who had neither hotels nor residences of any kind.

Even with the Shelter in Place hotels giving some homeless people temporary residences, there were still enough people exhibiting anti-social behavior on the street to make life in the Tenderloin district unbearable for many citizens. The crisis prompted Clark to move out of his apartment at 449 O’Farrell Street in October 2020.

“Every day, I would sit at my desk and view an encampment. I would see people overdose every couple of days, only to see them reappear on the same street the following day,” he said.

Even these harrowing memories aren’t the worst from Clark’s days living on O’Farrell Street.

“I saw drugged women get raped by teenage boys. I saw a naked, elderly lady get raped by a boy who could not have been older than 16. I found myself calling the police every few days for various concerns. After living there for half a year, rent prices plummeted during the pandemic, and I moved two streets up, one block over,” he said.

But even in a city where the quality of life varies radically within the space of even a few blocks, this transition didn’t end Clark’s exposure to the worst manifestations of the crisis. The city’s attempts to relieve the high concentration of homeless people in a few quarters haven’t solved the problem but dispersed it ever more widely within a city once renowned for its opulence, dynamism, and quality of life. He identified Market Street, SOMA (South of Market Street), Castro district, and the Mission district as regions that have absorbed large numbers of homeless people.

“It is not nearly as concentrated in the Tenderloin and downtown as it used to be. In neighborhoods and areas where there used to never be anyone homeless, they are now starting to appear,” he said.

Stephen Eide, a senior fellow at the Manhattan Institute who has studied and written widely on homelessness, noted that Clark’s view isn’t an isolated one.

“I would say that the consensus opinion is that homelessness has both been a problem in San Francisco for a number of decades and gotten worse in recent years. I have never met anyone who didn’t agree with both views. This perception certainly is backed up by the official data,” he said.

Eide faults the “Housing First” policy enshrined in state and federal programs for the city’s homeless, which places them in single-room occupancy (SRO) units in city-administered buildings. The consequences of this policy were the subject of an April 28 City Journal article detailing squalid and decrepit conditions in the buildings. Citing figures from San Francisco’s medical examiner, who found that at least 1,300 overdose deaths have happened in the city in the past two years, the report suggests that many of these deaths happened in SROs, and it disputes the claim in a San Francisco Chronicle piece that 166 people died in such facilities in 2020 and 2021.

Besides prompting him to move from his O’Farrell Street apartment, Clark’s experiences with the escalating crisis led him to found the HomeMore Project and to seek to implement approaches that will avoid repeating mistakes at the official level that he says have only exacerbated the crisis.

In his view, the relatively small size of San Francisco doesn’t lend itself to the approach favored by Breed. Clark noted that in January, Breed announced the opening of the Tenderloin Linkage Center. Launched as part of the city’s Tenderloin Emergency Initiative, the center’s website says that the facility is “designed to provide a safe space for anyone to easily and quickly access San Francisco health and human services resources.”

The Tenderloin district happens to be the neighborhood with the highest concentration of drug dealers in the city, Clark said. The problems of trying to run a drug treatment center there should be obvious. The new facility has received sharp criticism for functioning illegally as, in essence, a comfortable space for those with substance abuse problems to take drugs, instead of emphasizing treatment and prevention. Then when people leave, they run into the same temptations that plagued them before.

“After individuals leave the Tenderloin Linkage Center, they are bombarded with all their previous dealers. This creates a challenging environment to overcome addiction,” Clark said.

Recovering addicts who leave a center anywhere in the city run a high risk of encountering their former dealers, Clark said, given the city’s dimensions of about seven by seven miles, or about 46.9 square miles.

“We believe that to allocate care and resources to these individuals experiencing homelessness effectively, there is a need to go outside of San Francisco,” he said.

Therefore, Clark’s organization plans to build a treatment facility of its own in a neighboring city, which it isn’t yet ready to name. The HomeMore Project also promotes a different approach to treatment, according to Clark.

“Government and other nonprofits emphasize the destination, but we focus on the journey. You develop habits, understand these developments, and set a foundation for your future,” he said.

Breed’s office didn’t respond to a request for comment by press time.