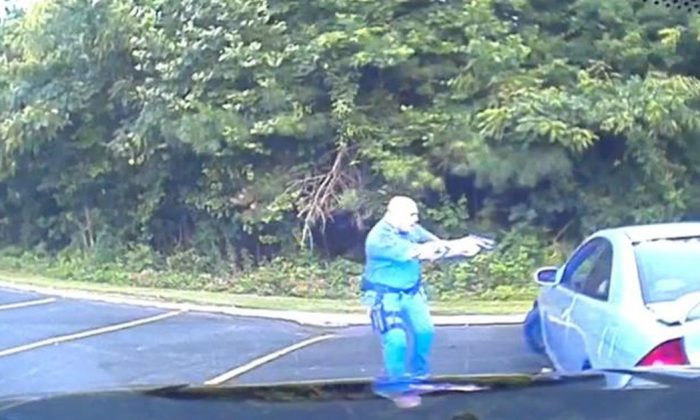 (Screenshot from video)
US

Official: No State Charges for Officer Who Fatally Shot Man

SENECA, S.C. (AP) — No criminal charges will be filed in South Carolina against a police officer who fatally shot a 19-year-old during a drug sting, a state prosecutor announced Tuesday, but the U.S. Justice Department is still investigating and could bring federal charges later.

Solicitor Chrissy Adams announced that after reviewing the case, she determined that Seneca police Lt. Mark Tiller won’t face state charges. She made the announcement after meeting with the family of Zachary Hammond, who was killed in the July 26 incident in a fast-food restaurant parking lot.

Ronald Richter Jr., an attorney for the family, said they respect Adams’ work, but “we completely disagree with the decision not to go forward.”

At the meeting, the family and attorneys for the first time saw the police cruiser video of the shooting, Richter said. “It was very painful for them to watch that, but for the first time they have a better understanding of what took place,” he told The Associated Press.

Adams’ statement said she would not release additional information about the case until federal authorities decide whether to charge the officer. But the State Law Enforcement Division released video and documents Tuesday. Media outlets had sued earlier, seeking that material.

The dashcam video, posted by several media outlets, shows the police cruiser speeding to the parking lot and pulling up behind a silver sedan.

“Hands up! Put ’em up!” Teller yells as he approaches the car. The car backs up and then starts pulling away. Teller grabs the left front fender of the car as it moves by, at which point he fires at the driver.

The car moves out of camera view, but the audio later picks up the sounds of crying and an officer telling someone to again put their hands up.

Before the shooting, Hammond had taken a woman on a first date, during which they stopped at McDonald’s and then drove to Hardee’s so Hammond could get a hamburger, according to a federal lawsuit filed by his family.

Seneca police said they were waiting at the Hardee’s after an undercover officer arranged a drug deal with the woman. As officers pulled up to Hammond’s car with lights flashing, he accelerated to leave, authorities said. The woman was not injured and later was charged with simple possession of marijuana.

Tiller has said through his lawyer that he thought Hammond was trying to run him over and fired twice to protect himself. Hammond’s family said a private autopsy showed that he was shot in the side and the back, proving the threat had passed.

But Greg Dietterick, the city administrator for Seneca, said in a statement Tuesday that the investigation “shows Lt. Tiller was acting in self-defense. It is now time to start healing Seneca.” The community of 8,200 is in in upstate South Carolina, a few miles west of Clemson.

Tiller attorney John Mussetto said the officer agrees with the outcome of the investigation. “As stated from day one, Lt. Tiller acted in self-defense and the decision today supports this position,” Mussetto said.

In its lawsuit, Hammond’s family says Tiller threated to blow Hammond’s head off. The officer’s attorneys deny that.

The lawsuit also says that after paramedics determined Hammond was dead, his body was left for 90 minutes on the ground, where it was bitten and stung by ants. A second officer gave the body a high-five sometime after other investigators arrived, according to the lawsuit.

In legal papers, lawyers have acknowledged that the second officer may have said something about inappropriate contact with Hammond’s body.

But the video released Tuesday does not show what happened after the shooting, nor can you see the body or hear any threat yelled.