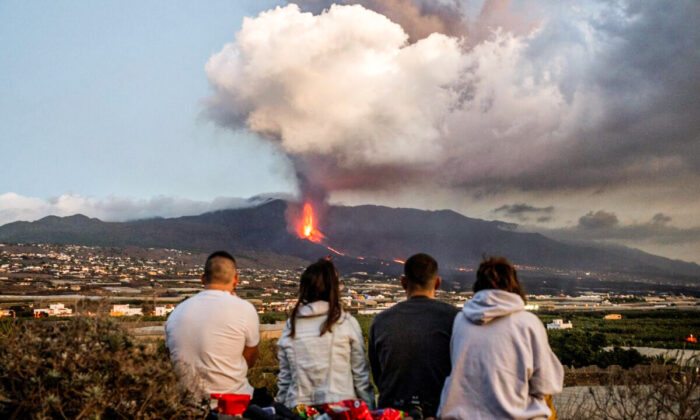 Residents watch as lava flows from a volcano as it continues to erupt on the Canary island of La Palma, Spain, on Oct. 26, 2021. (Emilio Morenatti/AP Photo)
Europe

An erupting volcano on the Spanish island of La Palma continued to emit huge amounts of magma and black ash Wednesday after the collapse of an inner cone on the previous night.

New lava flows emerged, causing landslides and overflows of magma into the primary lava flow that has advanced to the west of the island.

The president of the Canary Islands, Ángel Víctor Torres, said that the eruption was now “the most severe volcano that the European Union and Europe as a whole has suffered in the last 100 years.”

The EU’s Copernicus Emergency Management Service calculates that lava flow from the volcano has covered more than 908 hectares (3.5 square miles) of the island and destroyed at least 2,162 buildings.

Approximately 7,500 people have been forced to leave their homes since the volcano began erupting a month ago.

Scientists say the volcano is more active than ever and the eruption could go on for three months.