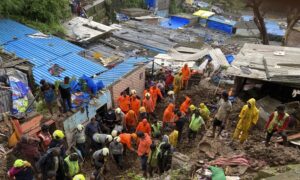 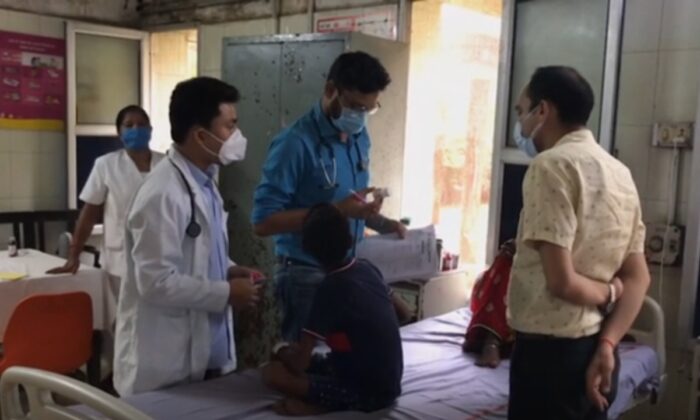 In this screenshot from video, doctors examine a child sitting on hospital bed in India, on Sept. 15, 2021. (AP via NTD)
World

Infections following monsoon rains have led to a fever outbreak in India’s northern Uttar Pradesh state which has killed at least 114 people in the past three weeks, health officials said Wednesday.

The state’s Health Minister Jai Pratap Singh told The Associated Press that most cases were caused by dengue, a seasonal viral infection spread by mosquitoes, followed by leptospirosis, scrub typhus, and malaria.

Leptospirosis and scrub typhus are bacterial infections, while malaria is a mosquito-borne disease caused by a parasite. They typically spike after the rainy season in India.

Singh said the dengue cases were due to a virulent strain called “D2,” which has been detected in some of the state’s districts in a sample survey carried out by a team of the Indian Council of Medical Research.

It can lead to internal bleeding, liver enlargement, circulatory shutdown, and death.

Prevention efforts targeted at destroying mosquito-breeding sites, like removing trash or old tires and other objects containing standing water, are still the best ways to curb the spread of the disease, according to health experts.

The health system in Lucknow, the state capital, is also buckling as a surge in cases has put pressure on hospitals there.

The city has so far reported over 1,500 cases of fever linked to the outbreak after authorities began conducting door-to-door surveillance last week.

Authorities are scrambling resources to control the outbreak.

Uttar Pradesh, India’s most populous state, often figures disproportionately among the post-monsoon infection fatalities in the country because of the weak health system.

In the city of Prayagraj, footage showed hospitals crowded with cases of fever, while the district administrator Sanjay Kumar Kharati claimed there would be no problem of arranging beds for children since the region opened “a new 80-bed hospital since a week ago.”

Thousands of people suffer from dengue, encephalitis, malaria, typhoid, and other mosquito-borne diseases each year during the summer monsoon.