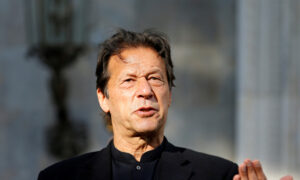 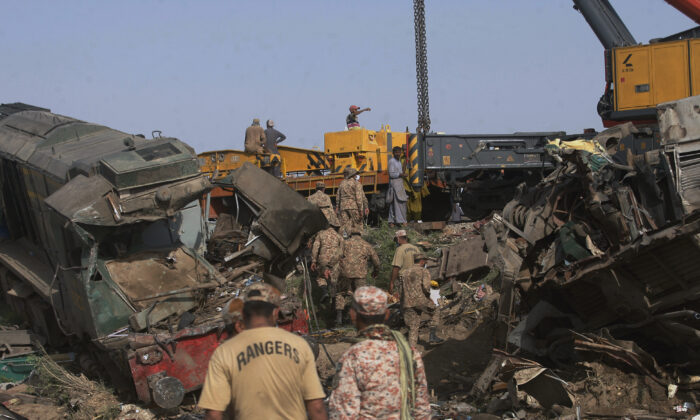 Soldiers arrive to conduct rescue operation to clear the track at the site of a train collision in the Ghotki district, southern Pakistan, on June 8, 2021. (Fareed Khan/AP Photo)
Asia & Pacific

GHOTKI, Pakistan—The death toll from a horrific collision of two trains in southern Pakistan rose to 65 on Tuesday after rescuers pulled 15 more bodies from crumpled cars a day after the crash, government officials said.

The collision took place on a dilapidated railway track in Ghotki, a district in Sindh province, when an express train barreled into another that had derailed minutes earlier before dawn Monday.

Most of the passengers—there were about 1,100 on both trains—were asleep when the Millat Express, traveling between the southern port city of Karachi to Sargodha in eastern Punjab province, derailed, and many of its cars overturned. As passengers scrambled to get out, another passenger train, the Sir Syed Express, crashed into the derailed coaches.

Rescue work continued throughout the day Monday, overnight, and into Tuesday. Bodies of passengers killed in the crash were taken to their hometowns for burial.

Shafiq Ahmed Mahisar, a commissioner in the Sukkar district, said all the bodies had been retrieved after the overnight efforts. Besides the 65 passengers who died, more than 100 passengers were injured, he said.

Army engineers and soldiers dispatched from a nearby military base assisted in the rescue and heavy machinery arrived in Ghotki hours later to cut open some train cars. Engineers restored rail service after repairing the track where the accident happened, a statement released by the railway said.

Aijaz Ahmed, the driver of the Sir Syed Express, said Monday he braked when he saw the disabled train but did not have time to avoid the collision.

The more critically injured were transported to hospitals with better facilities in Sindh and also Punjab province, while those more stable were being treated in Ghotki hospital, said deputy commissioner Usman Abdullah, who also confirmed the 65 fatalities.

Ata Mohammad, a passenger, said he was asleep on the Millat Express when it derailed. He woke up to a big jolt and saw other passengers trying to climb out from overturned and derailed coaches. Then the other train hit.

“I feel as if I am still hearing cries,” said a weeping Mohammad, who lost family members in the crash.

Sher Muhammad, a 45-year-old farmer, was working on his land when he saw a train derail on the tracks some distance away. He rushed to the scene but before he could reach it, the second train crashed into the first.

“I don’t know whether I will be able to forget that tragic scene,” Muhammad said, recounting how he saw women, children, and men crying for help.

Villagers who reached the scene first started helping the victims, pulling the injured and the dead from the wreckage until ambulances started coming.

Azam Swati, the country’s railways minister, said action will be taken against those whose negligence caused the collision. Earlier, the military said the rescue operation was completed by noon Tuesday.

Train accidents are common in Pakistan, where successive governments have paid little attention to improving the poorly maintained signal system and aging tracks.

In 1990, a packed passenger plowed into a standing freight train in southern Pakistan, killing 210 people in the worst rail disaster in the nation’s history.

By Asim Tanveer and Muhammad Farooq