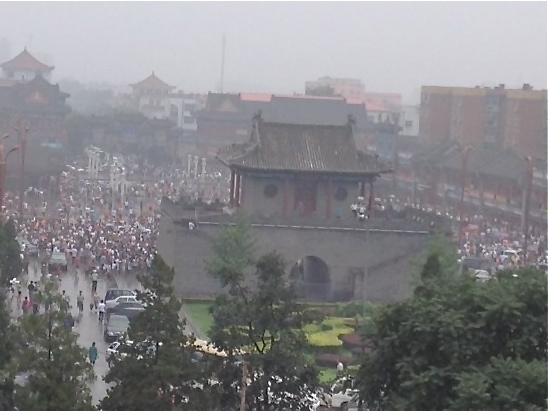 Thousands of people turn out in a local square to mourn victims of the June 30 Tianjin shopping mall fire. (Posted to Internet by a Chinese blogger on July 6)
China

A recent shopping mall blaze in Northern China’s Tianjin municipality has sparked a storm of online controversy, following announcements by authorities of 10 deaths and 16 injuries, while witnesses maintain that 378 people died, many of them jumping off the building.

The fire broke out on Saturday, June 30, but Tianjin authorities remained silent for seven days and did not offer any explanation to the public until July 5.

Local people doubt the official claim, saying it’s a cover-up. Some people said that the report of only one customer dying is “an outright lie.” One resident who lives near the shopping mall told The Epoch Times that he saw many people jumping off the building to escape.

A second resident said the fire started around 3:30 p.m., and the police were notified between 3:30 p.m. and 3:35 p.m. Authorities, however, stated that the fire started at 4 p.m. and firefighters responded promptly, arriving at the scene at around 4 p.m.

When the fire started, the mall manager ordered security guards to lock two of the doors on the first floor to prevent customers from looting, according to the second resident. Security guards chased down some customers who ran out of the mall and demanded to inspect them.

As the fire spread, the manager later ordered the doors opened again, but the power was out by then and the automatic doors would not open, the second resident said. When someone forced the doors open at last, the fire had already engulfed the two doors. From what could be seen on cell phone videos taken by onlookers, no one was rescued at these doors.

Reports surfaced online of officials putting restrictions on reporters who attempted to cover the fire, including having plainclothes police follow them around. Local police also ordered hospital staff to withhold information from the public, according to the second resident interviewed by The Epoch Times.

The local crematorium also kept all its workers from returning home. One worker was detained for “spreading rumors” after revealing that he had seen over 200 bodies brought into the crematorium. State censors quickly deleted Internet postings of the fire, and many bloggers told the media that Internet access was down.

A third resident told Sound of Hope Radio that over 500 people were killed in the fire, but none of the locals dared speak about it. “If anyone said anything or posted anything online, he would be arrested. A lot of people have already been arrested. Family members of the victims were being followed everywhere to prevent them from talking and exposing anything,” this resident said.

On July 6, seven days after the fire, thousands of people responded to an online call for mourning and gathered at a local square. Authorities dispatched a large force to disperse the crowd and imposed martial law at around 3 p.m. Three people were arrested.

Zhang Gaoli, Tianjin’s Party secretary, is a candidate for the nine-member Politburo Standing Committee, which governs the country. Hong Kong’s Apple Daily said that Tianjin authorities censored reports about the fire so that Zhang’s political career won’t be affected.

A key Tianjin Party leader ordered all Party members to “voice the same message and make the same claim” in order to maintain stability and harmony, according to China Journalist Investigations, a website from Hong Kong that publishes in-depth investigative reports.

Prominent rights activist Hu Jia, who was in Jixian County on July 5, told Secret China, a Chinese language Website outside China, that it’s against the law for Tianjin authorities to cover up the actual death toll, and Zhang Gaoli should be the one taking responsibility.

“Three to four hundred people have died, and this [news] would certainly affect Zhang Gaoli’s political career. But even if he doesn’t do anything about it, his staff will try to make sure his career will be safe,” Hu Jia said.