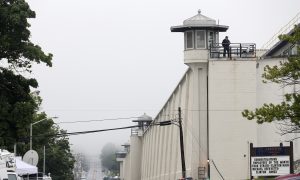 Across US, Over 220 Prison Escapees Listed as on the Loose
0
Share Now
TelegramFacebookTweetEmailTellMeWeReddit
Copy Link 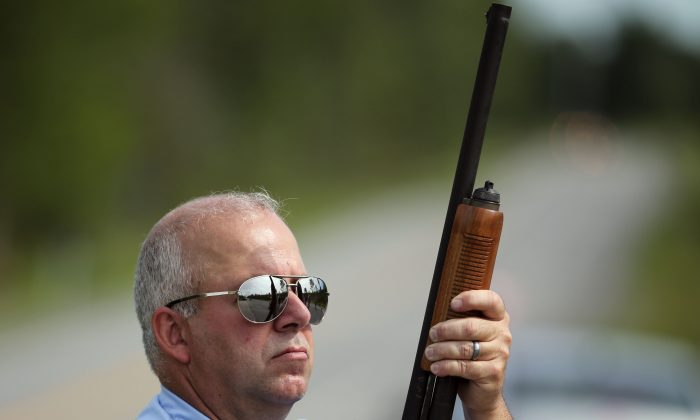 A corrections officer holds a gun at a roadblock in Malone, N.Y. on Saturday, June 27, 2015. The shooting death of Richard Matt, one escaped killer, brought new energy to the three-week hunt for David Sweat, a second escaped murderer. (AP Photo/Mike Groll)
US

1 Escaped Murderer Fatally Shot in NY Woods, Other Is Still on the Run Saturday

MALONE, N.Y.—One of two convicted murderers who staged a brazen escape from an upstate maximum-security prison three weeks ago was shot and killed Friday in a gunbattle with law enforcement officers in a wooded area about 30 miles from the prison, and the other is on the run.

U.S. Sen. Charles Schumer, who was briefed by the U.S. Border Patrol and U.S. Marshals Service, said Richard Matt was fatally shot by a Border Patrol agent from Vermont. Officers are trucking in floodlights to where David Sweat is believed to be hiding, not far from where Matt was killed.

UPDATE: As of 11 a.m. Saturday, inmate Sweat is still on the lam.

Clinton County Sheriff David Favro says Sweat is likely fatigued and no longer has a partner to watch his back or act as a lookout while he rests.

Officers continued to focus Saturday on heavy woods 30 miles west of Clinton Correctional Facility as they looked for Sweat around the area where Matt was killed.

Favro says there is no evidence the pair had split up.

Matt Killed in the Capture

Schumer said searchers closed in on the pair early Friday after receiving a 911 call from a woman who heard someone knock on her door in Malone, which is about 30 miles west of the Clinton Correctional Facility in New York.

They brought the dogs, and they got a scent.
— Sen. Charles Schumer

“She didn’t answer the door, but she called the police,” he said. “They brought the dogs, and they got a scent. They followed that scent and put out a lot of troops around the cabin. They came upon him and found him and killed him.”

Schumer said at least one of the prisoners was armed. The pair escaped early June 6 from the prison in Dannemora, near the Canadian border.

Police have blocked off roads in the area as officers hunt for Sweat.

State Police Maj. Charles Guess said earlier Friday that the search area had shifted slightly northwest to Malone after investigators found evidence left behind by the escapees. Items were found Thursday at a cabin and Friday morning in a field, both in Malone, he said.

Matt and Sweat used power tools to saw through a steel cell wall and several steel steam pipes, bashed a hole through a 2-foot-thick brick wall, squirmed through pipes and emerged from a manhole outside the prison.

Sweat was serving a sentence of life without parole in the killing of a sheriff’s deputy in Broome County in 2002. Matt was serving 25 years to life for the killing and dismembering of his former boss. They were added to the U.S. Marshals Service’s 15 Most Wanted fugitives list two weeks after getting away.

The search for the escaped killers was initially concentrated around the prison and a rural community where search dogs had caught the scent of both men. The search had since been expanded to neighboring counties, and, while authorities said there was no evidence the men had gotten out of the general area, they conceded they could have been almost anywhere.

A civilian worker at the prison was charged with helping the killers flee by giving them hacksaw blades, chisels and other tools.

Prosecutors said Joyce Mitchell, a prison tailoring shop instructor who got close to the men while working with them, had agreed to be their getaway driver but backed out because she felt guilty for participating. Mitchell pleaded not guilty June 15 to charges including felony promoting prison contraband.

Authorities said the men had filled their beds in their adjacent cells with clothes to make it appear they were sleeping when guards made overnight rounds. On a cut steam pipe, the prisoners left a taunting note containing a crude caricature of an Asian face and the words “Have a nice day.”

Authorities also said Mitchell had discussed killing her husband, Lyle Mitchell, as part of the plot.

On June 24, authorities charged Clinton correction officer Gene Palmer with promoting prison contraband, tampering with physical evidence and official misconduct. Officials said he gave the two prisoners the frozen hamburger meat Joyce Mitchell had used to hide the tools she smuggled to Sweat and Matt. Palmer’s attorney said he had no knowledge that the meat contained hacksaw blades, a bit and a screwdriver.

Dannemora, built in 1845, occupies just over 1 square mile within the northern reaches of the Adirondack Forest Preserve and is surrounded by forest and farmland. The stark white perimeter wall of the prison, topped with guard towers, borders a main street in the village’s business district.

The escape was the first in history from Clinton Correctional’s maximum-security portion. In July 2003, two convicted murderers used tools from a carpentry shop at Elmira Correctional Facility to dig a hole in the roof of their cell and a rope of bedsheets to go over the wall. They were captured within three days, and a subsequent state investigation cited lax inmate supervision, poor tool control and incomplete cell searches.