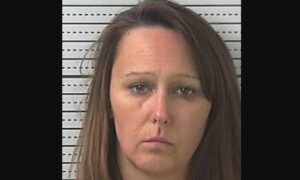 The wife of a Florida police officer died Friday after she was trapped in the backseat of a police-issued vehicle for several hours in sweltering temperatures.

Clara Paulino died Friday after she became trapped in the SUV outside Miami Shores. She is the wife of officer Aristides Paulino, said Matthew Reyes, the vice president of the Miami Fraternal Order of Police, according to local reports.

Reyes said the SUV has a cage that separates the back seat from the front seat. It also has bars on the windows.

Clara Paulino had climbed into the backseat of the SUV to look for something when the doors closed, triggering a self-locking mechanism, said officials, according to The Associated Press.

The case is being investigated by the Miami-Dade Police Department.

“That’s standard option with most law enforcement vehicles so that a detainee can’t get out of the back of the vehicle,” said Stephen Mitchell, the general services bureau director for the Hillsborough County Sheriff’s Office, according to the paper. “You have to lift the handle from the outside.”

Their son, also named Aristides, told the paper that the family doesn’t want to speak about her death.