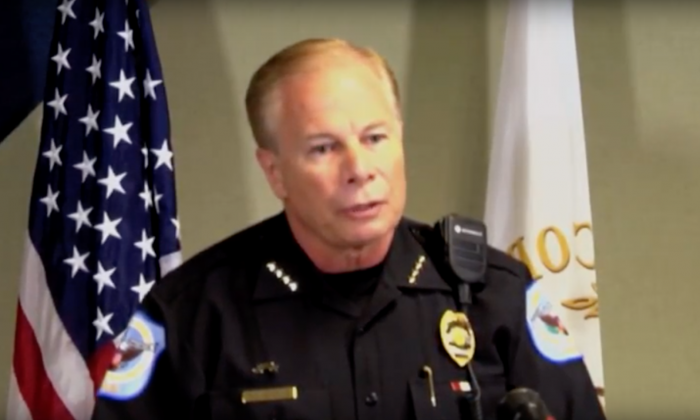 The Georgia police officer who was captured in a video telling a white woman “we only kill black people” will retire amid the backlash.

Footage of the exchange was caught on dashcam back in July last year. It shows a white woman in a car telling Cobb County police Lt. Greg Abbott, who was conducting a routine traffic stop, that she was scared to move her hands to get her phone.

The footage then shows Abbott, a white officer, interrupt her and say, “But you’re not black. Remember, we only shoot black people. Yeah. We only kill black people, right?” The video can be seen below.

On Thursday, Aug. 31, Police Chief Mike Register told reporters at a press conference that he was going to terminate Abbott’s employment. On Friday, Abbott’s lawyer announced that he would retire, CBS affiliate WGCL-TV reported.

“This afternoon, after 27 years of faithful service to the citizens of Cobb County, Lt. Gregg Abbott made the decision to retire,” the lawyer said.

Chief Register only received the information about the dashboard video on Aug. 25 of this year, according to a statement. As soon the video was obtained and the comments recorded in the footage was confirmed, the officer was immediately placed on administrative duties until the investigation was completed.

“No matter what the context, statements like these are unacceptable and are not indicative of the type of culture we are trying to facilitate here in the police department, as well as within the county,” Chief Register said in a statement.

“I have seen the video and obviously have great concerns. I find the comments on the video repugnant and offensive beyond measure. I have personally spoken with Mrs. Deane Bonner of the Cobb NAACP and Ben Williams, chairman of the Cobb chapter of the SCLC and expressed my deep disappointment about this behavior,” Boyce said in a statement.

Abbott’s lawyer, Lance LoRusso, told the Washington Post that his comments must be considered in the context of the incident.

“His comments must be observed in their totality to understand their context,” LoRusso said in a statement Thursday.

“He was attempting to de-escalate a situation involving an uncooperative passenger. In context, his comments were clearly aimed at attempting to gain compliance by using the passenger’s own statements and reasoning to avoid making an arrest” LoRusso said.

But the police chief said that there is “no excuse” in the press conference.

“In my opinion, I feel that no matter what context you try to take those comments in, the statements were inexcusable and inappropriate,” Register said.