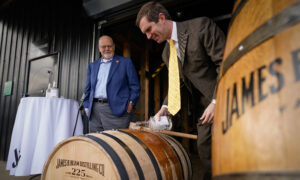 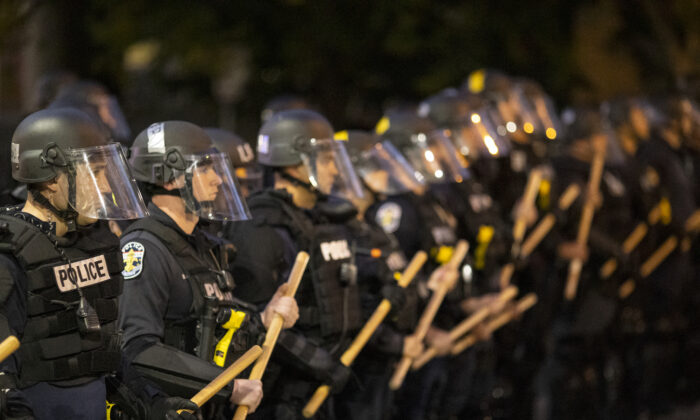 Police in riot gear stand in formation during protests in Louisville, Ky., on May 29, 2020. (Brett Carlsen/Getty Images)
US News

A local Kentucky news crew was targeted and shot with “pepper bullets” Friday night by riot police while they attempted to get footage of the demonstrations in Louisville as protests continued for the third night straight in the United States following Monday’s police custody death of George Floyd.

Kaitlin Rust, a reporter with local Louisville news agency WAVE 3 News, was together with her photojournalist around 10 p.m. to broadcast the demonstration over the death of Breonna Taylor—a black woman who was shot and killed by police in her own home on March 13.

In a video shared on Twitter, Rust is seen walking around the area while broadcasting the event. Once she starts walking towards an area with a heavy presence of the Louisville Metro Police Department (LMPD), officers lined up in riot gear to keep them from passing, an officer is seen aiming directly at the camera crew.

“We strongly condemn the actions of the LMPD officer who tonight repeatedly fired at and hit our reporter and cameraman, both of whom were courageously and lawfully covering breaking news in their community,” the outlets General News Manager Ken Selvaggi said in a statement.

“There is simply no justification for the Louisville police to wantonly open fire, even with pepper balls, on any journalists under any circumstances,” the statement continued.

The incident prompted an apology from the LMPD. Jessie Halladay, a spokeswoman with the department said “I want to apologize,” the Courier-Journal reported. “It’s not something that should have occurred if she was singled out as a reporter.”

Halladay added that right now the officer who targeted the news crew hasn’t been identified, but that police would review the video again, and “if we need to do any investigation for discipline, we will do that.”

Louisville Mayor Greg Fischer said in a statement that the Friday nights protests besmirch “any claim to honor Breonna Taylor’s memory.” The actions of violent protesters in destroying buildings and property in the city is “absolutely unacceptable,” he said.

Fischer and Halladay said they don’t believe local protesters were to blame for the destruction and a large percentage of protesters came from outside Louisville. “I don’t know anyone from our great city that wants to destroy it,” he said.

Taylor, a 26-year-old emergency medical tech, was shot eight times on March 13 by Louisville narcotics detectives. The FBI has opened an investigation into her death.

That same night at the U.S. capitol, protesters gathered outside the White House and ran off a Fox News journalist, who had been covering the clashes between the Secret Service and more than 100 people early on Saturday morning, Fox News reported.

The scene was caught on video by the Daily Caller, showing veteran Fox News reporter Leland Vittert covering protests in Lafayette Park just before 1 a.m. when at least a dozen of masked protesters surrounded them.

The masked protesters punched and hit Vittert and his crew of three members. One of the teams’ camera was broken during the altercation after one of the thug protesters tried to steal it.

“This was the scariest situation I’ve been in since I got chased out of Tahrir Square by a mob, and this was equally scary,” Vittert told Fox News.

Protesters hurled pieces of bricks, bottles, and other objects at Secret Service and U.S. Park Police officers who were in riot gear behind barricades. Protesters at times kicked and punched officers and wrestled over the barricades.

As some in the crowd grew more aggressive, police deployed pepper spray to keep them back and maintain a perimeter of officers around the White House. Other demonstrators came to the aid of protesters who were sprayed, their eyes red and puffy, offering bottles of milk and water to splash on their faces.

The protest went on for hours before police declared the gathering “unlawful” and ordered everyone to leave Lafayette Square, a seven-acre public park located directly north of the White House. Dozens of officers pushed forward with their shields and fired off streams of pepper spray at protesters.

“Great job last night at the White House by the U.S. Secret Service,” he wrote in a Twitter post on Saturday morning. “They were not only totally professional, but very cool.”

“I was inside, watched every move, and couldn’t have felt more safe,” he added.

Trump said that the protesters are professionally organized but were kept away from the fence efficiently by the agents.

“Nobody came close to breaching the fence. If they had they would have been greeted with the most vicious dogs, and most ominous weapons, I have ever seen,” he said.

His remarks came after protests caused a brief lockdown at the White House on Friday evening.

After a CNN reporter was arrested while covering the protests in Minneapolis, Minnesota earlier this week, Gov. Tim Walz apologized to the network.

“There is absolutely no reason that something like this should happen. Calls were made immediately. This is a very public apology,” Walz said at a press conference Friday.

The Democrat said he called CNN President Jeff Zucker a few minutes after learning of what happened.

CNN confirmed the contact and thanked Walz “for his swift action,” which aided the release of the crew.

Omar Jimenez was arrested by Minnesota State Patrol officers while reporting live at about 5 a.m. on Friday from the protests. He was led away in handcuffs, followed by a CNN producer and camera crew.

“In the course of clearing the streets and restoring order at Lake Street and Snelling Avenue, four people were arrested by State Patrol troopers, including three members of a CNN crew,” the state patrol said in a statement.

“The three were released once they were confirmed to be members of the media,” it added.

The Associated Press and reporters Zachary Stieber and Allen Zhong contributed to this report.