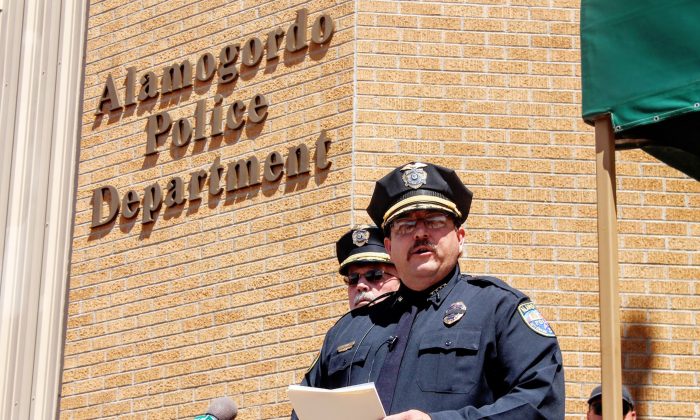 ALBUQUERQUE, N.M.—A police officer who authorities say attempted to chase down a 38-year-old felon with three active arrest warrants was fatally shot by the suspect Friday after an exchange of gunfire in a southern New Mexico town.

The suspect, Joseph Moreno, also was killed in the morning shootout near a trailer park in Alamogordo, police said at a news conference. The desert town of about 31,000 people is home to the White Sands National Monument and Holloman Air Force Base.

Police identified the slain officer as Clint Corvinus, a four-year veteran who graduated from high school in Alamogordo. Authorities said he is survived by his parents, girlfriend and an 8-year-old daughter.

“I am again so very saddened to see that yet another courageous law enforcement officer has been killed in the line of duty,” Gov. Susana Martinez said in a statement. “The violence against our police officers has to end, and we must do everything we can to stand up for those who put their lives on the line every single day to protect us.”

Corvinus’ death marks the second fatal shooting of a police officer in a rural area of the state in less than a month. Three weeks ago, authorities said an Ohio fugitive gunned down Officer Jose Chavez during a traffic stop in Hatch, a village about 100 miles west of Alamogordo that’s known for its green chile crop.

The suspect in that shooting, Jesse Hanes, was taken into custody after a dramatic car pursuit, a carjacking and the shooting of a bystander whose car Hanes stole, police said.

How Other Nations Stop US From Deporting Criminal Illegal Immigrants

The case and other recent events have led to renewed calls from Martinez, a Republican and former prosecutor, to reinstate New Mexico’s death penalty. Lawmakers repealed it in 2009 before Martinez took office.

The governor said she would back legislation for capital punishment when the Legislature convenes in January.

In the last legislative session, prior attacks on police—including the May and October 2015 shooting deaths of officers in Albuquerque and suburban Rio Rancho—galvanized a largely unsuccessful push by Republicans in the state Legislature for several crime measures, including one that aimed to make targeted assaults on officers punishable under the state hate crimes statute.

Within hours of the shooting Friday, Rep. Nate Gentry, an Albuquerque Republican and the state’s House Majority leader, issued a statement that called for laws that “put—and keep—the violent criminals who terrorize our communities behind bars.”

Flags were flown at half-staff at the Alamogordo police department after the shootout and mourners left flowers outside the building as law enforcement and members of the state’s congressional delegation issued statements in support of the fallen officer’s colleagues and families.

Corvinus, on patrol as a field training officer Friday morning, was with another officer when they encountered Moreno. He led the officers on a foot pursuit in an alley before gunfire erupted, state police said.

State Police said in a statement that Moreno had a lengthy criminal history that included arrests for armed robbery, aggravated burglary, and multiple counts of being a felon in possession of a firearm.

Online court records showed he was scheduled for trial in December on drug charges. His outstanding warrants stemmed from charges related to drug trafficking and driving with a suspended license.

A booking photo from the city of Alamogordo showed Moreno with dramatic facial tattoos, including one across jaw that resembled the teeth of skeleton.