Shooting Near Rutgers University Kills at Least 2, Injures 6 Others: Officials
0 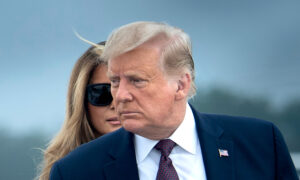 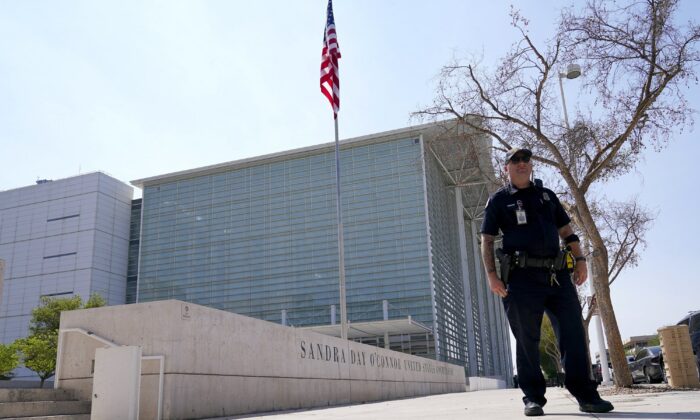 A Phoenix Police officer stands in front of the Sandra Day O'Connor U.S. Courthouse in Phoenix, on Tuesday, Sept. 15, 2020. A drive-by shooting wounded a federal court security officer Tuesday outside the courthouse in downtown Phoenix, authorities said. The officer was taken to a hospital and is expected to recover, according to city police and the FBI, which is investigating. (AP Photo/Ross D. Franklin)
Crime and Incidents

A federal court security officer was shot near a federal courthouse in Phoenix, Arizona, officials said on Tuesday.

A suspect in the incident is currently being sought, police said in an alert.

According to the department, the shooting occurred near the Sandra Day O’Connor U.S. Courthouse near 7th Avenue and Jefferson Street.

The FBI has now taken over the investigation, police told ABC15.

“If you didn’t think it could happen here, it just did. A federal officer was just shot in front of the Sandra Day O’Connor federal building in a drive by attack,” he wrote.

BREAKING: FEDERAL OFFICER SHOT IN DRIVE BY IN DOWNTOWN PHX

If you didn’t think it could happen here, it just did. A federal officer was just shot in front of the Sandra Day O’Connor federal building in a drive by attack.

He placed the blame on Black Lives Matter and Antifa riots across the United States.

“Multiple shots were fired at the officer who was struck in the vest. Injuries are believed to be non life threatening. Make no mistake, this is a direct result of the extremist anti-police attacks we have seen from BLM and Antifa across the country. This insanity needs to stop,” he wrote.

BREAKING: Shooting outside 401 W. Washington, near the Federal Courthouse. Non-life threatening injuries. #PhxPD looking for vehicle shown in this picture. Any tips call 602-262-6151 or https://t.co/hF4eXJ45F8 pic.twitter.com/wfvu8u5drX

DiCiccio said the victim is a deputized U.S. Marshal who worked at the courthouse.

He confirmed that the police department will now be “moving to two-person patrols” in light of the incident.

A description of the suspect or vehicle was not provided. A motive was also not detailed.

The shooting follows a Saturday ambush attack on two sheriff’s deputies in Los Angeles, which left both in critical condition. Officials are offering a $175,000 reward for information leading to the arrest and capture of the suspect.

In that incident, a person approached the vehicle from behind before opening fire on the two deputies, who were sitting in a vehicle.