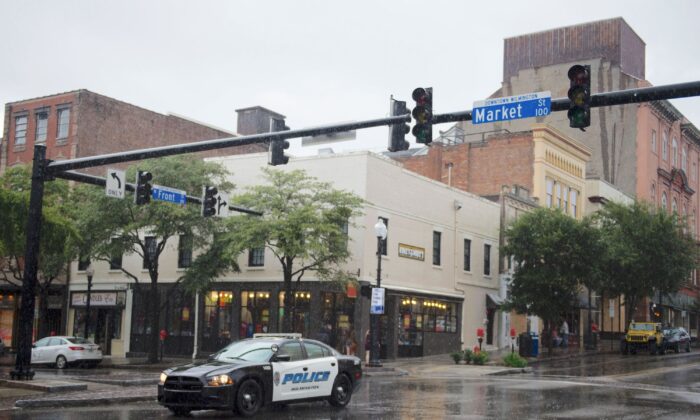 A police car drives through an intersection in Wilmington, N.C., on Sept. 13, 2018. (Andrew Caballero/AFP/Getty Images)
US News

A police officer in Amarillo, Texas, was shot by a mortar firework while responding to a call about a group of people shooting off fireworks on the Fourth of July.

“A mortar shell was shot through his open driver side window,” the police department wrote in a news release on Sunday.

The firework exploded and caused injuries to the officer, and it damaged the vehicle, said the department.

“Other officers responded but could not locate the suspect due to the large number of fireworks being shot at them by the crowd,” the department wrote.

The unnamed and injured officer was taken to a nearby hospital. He suffered non-life-threatening injuries.

Authorities said in the release that officers saw “multiple people at the park filming this incident with their cell phones.”

Anyone with information about this incident can contact the department at 378-4258 or 378-9468, and anyone wishing to remain anonymous can call Amarillo Crime Stoppers at 374-4400.

Meanwhile, over the Fourth of July holiday weekend, two officers in New York City were injured after a bullet was fired into their vehicle.

The officers were sitting in a car in the Bronx when a shot was fired, according to local reports. No arrests have been made.

“Two cops inside takes a bullet to the windshield outside the 40 Pct. stationhouse. Another perp points a gun at cops in Queens. Another throws a lit firework into an NYPD vehicle in Brooklyn. This is the environment that @NYCMayor & @NYCCouncil have created. Unacceptable,” wrote an NYPD officer union about the incident.

And in Ohio, a man shot and killed an officer early on Saturday in the parking lot of a Home Depot, the Toledo Police Department said.