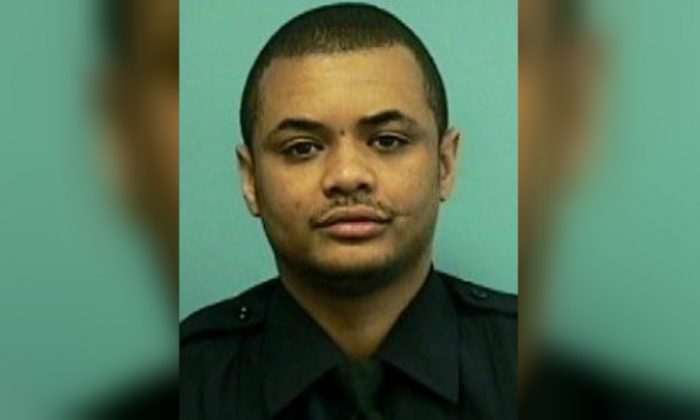 Sean Suiter, an 18-year veteran of the Baltimore Police Department, who has died after he was shot by an unknown suspect on Nov. 15, 2017. (BPD)
Crime and Incidents

A Baltimore police officer who was shot in the head while investigating a murder on Wednesday has died in the hospital, police say.

Detective Sean Suiter was surrounded by his family at the hospital when he passed away on Thursday, Nov. 16. Suiter, a father of two, served in the police department for 18 years.

“His tragic death will forever impact the BPD,” Baltimore City Police Commissioner Kevin Davis wrote in an email obtained by The Baltimore Sun. “Each of you go out there and put your lives on the line every single day. The importance of your sacrifice, and Sean’s, can’t be overstated.”

.@BaltimorePolice Homicide Detective Sean Suiter, pictured here investigating an August murder, was pronounced dead just after noon today at Shock Trauma. He is a formal Naval Officer and an 18 year veteran of the BPD. pic.twitter.com/b6WXR1SwuZ

Authorities cordoned off an entire city block and police cadets are going door to door to collect information.

“We need to make sure that we collect every bit of evidence and make sure that the shooter is nowhere nearby,” Davis said Wednesday outside the hospital where Suiter was being treated.

Baltimore police and their federal counterparts are offering a $69,000 reward for information that leads to the capture of the killer. Davis said that the “cold, callous” shooter is still on the run, but not for long.

Suiter was shot in Harlem Park, an area of West Baltimore notorious for its high crime rate. Suiter was investigating a murder in the neighborhood with another officer when the two came across a suspicious man on a vacant lot in the middle of the block.

The officers split up to cover different exits. Suiter approached the person and was shot in the head, a police source told The Baltimore Sun.

An anonymous police source also told Baltimore Sun that Suiter was looking for a witness in a pending murder case.

Police are currently engaged in what they described as a “tactical” operation in the neighborhood where the murder took place. Local investigators are being assisted by The FBI, the DEA, the Bureau of Alcohol, Tobacco, Firearms and Explosives, and Metro Crime Stoppers.

Statement from President Ryan and the FOP on the Line of Duty Death of Homicide Detective Sean Suiter, an 18 year veteran @BaltimorePolice. pic.twitter.com/IBh2QlfDvQ

The shooting took place on the 900 block of Bennet Place at around 4:30 p.m on Wednesday.

Suiter is the second police officer to be killed in West Baltimore this month. On Nov. 4, Sgt. Tony Anthony Mason Jr., 40, a District of Columbia police officer, was shot and killed in the 2800 block of Elgin Avenue.

Gov. Larry Hogan wrote on Twitter that the “individual responsible for this heinous crime will be found, charged, and prosecuted to the fullest extent of the law.”

“Baltimore Police has our full support as they track down this violent criminal and bring him to justice,” Hogan wrote.

Baltimore has had 308 homicides in 2017 so far, becoming the third consecutive year with more than 300 killings.