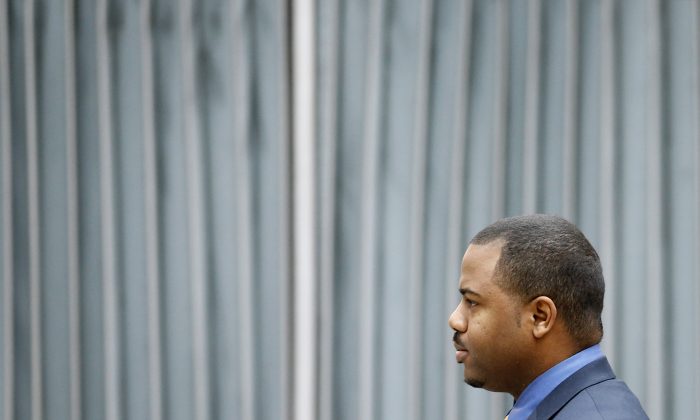 William Porter, one of six Baltimore City police officers charged in connection to the death of Freddie Gray, walks to a courthouse for jury selection in his trial in Baltimore on Monday, Nov. 30, 2015. (AP Photo/Patrick Semansky)
Crime and Incidents

BALTIMORE—Baltimore Police Officer William Porter is set to face a jury in the first trial stemming from the death of Freddie Gray, a young black man whose death from injuries he suffered in police custody triggered protests and rioting, and helped fuel the Black Lives Matter movement.

Porter, who is also black, is among six officers charged in the case. He faces charges of involuntary manslaughter, second-degree assault, misconduct in office and reckless endangerment. Prosecutors say he failed to render aid to Gray, who repeatedly asked for medical attention. The charges carry maximum prison terms totaling about 25 years.

The jury selection process has been relatively brisk in light of defense assertions in pretrial proceedings that it would be impossible to seat an impartial panel. Judge Barry Williams has repeatedly denied defense motions to move the trial out of Baltimore.

Williams questioned 150 jurors, mostly out of public view, Monday and Tuesday in an efficient process designed to shield their identities. Some were dismissed, leaving a smaller pool for the final selection.

On Wednesday, the judge asked jurors who had been called back whether they had anything to report that might affect their ability to be fair and impartial. Only four said they did.

Gray, 25, died April 19 of a severe spinal injury he suffered while riding in the back of police van without a seatbelt, a violation of department policy. Porter is accused of failing to get him medical help during several stops on the 45-minute trip. Gray arrived at a police station unresponsive, was taken to a hospital and died a week later.

For several days after he died, the demonstrations were mostly peaceful. But on the day Gray was buried, looting and rioting started, and businesses were burned down. The unrest caused at least $33 million in public and private property damage and police overtime.

A verdict will likely set the tone for the city. If Porter is acquitted, there could be protests and possibly more unrest. A conviction could send shock waves through the city’s troubled police department.