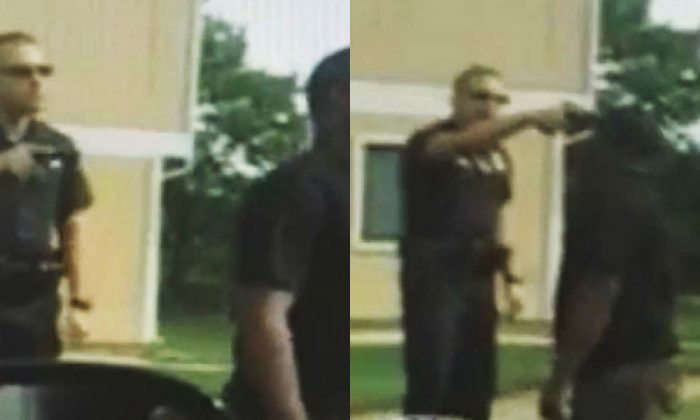 Officer Convicted of Assault for Pointing Gun at Man’s Forehead, Captured on Video

A former police officer who held a gun to a man’s head in an attempt to impress his friends was convicted on Wednesday of first-degree assault and misconduct in office, according to reports out of Maryland.

The incident was captured on video, and it was released by police (WARNING: The footage might be disturbing for some):

Officer Jenchesky Santiago, of Maryland’s Prince George County, apparently held the gun to a man’s forehead and told him: “I dare you to [expletive] fight me, son.” A video of the May 2014 incident was captured on camera, which was later released by the police department.

William Cunningham, the victim, said on Wednesday that he thinks about the incident on a regular basis, reported The Washington Post. The incident went down during a traffic stop near his front lawn.

“I thought I was going to die right there,” he told the paper. “I just thought it was over.”

Santiago told the judge that Cunningham cursed at him and he pulled his pistol on him to gain what he described as a “tactical advantage,” reported WUSA-9 TV. He claimed he saw Cunningham reaching for his waist.

Cunningham said he didn’t cuss at him or reach for his waist.

The police department didn’t side with Santiago.

“The actions Officer Santiago chose to take that day are his alone.”said Chief Mark Magaw. “His behavior is flagrant, appalling and isolated. His actions are among the worst I’ve seen as Chief of Police and that will be taken into account when I make a decision about his employment.”

Cunningham added that he hopes other cops will see the video and that “officers will be more mindful of the situations they get in and the way they conduct themselves.”