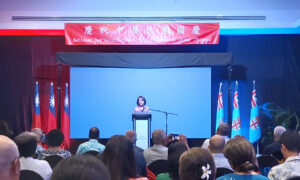 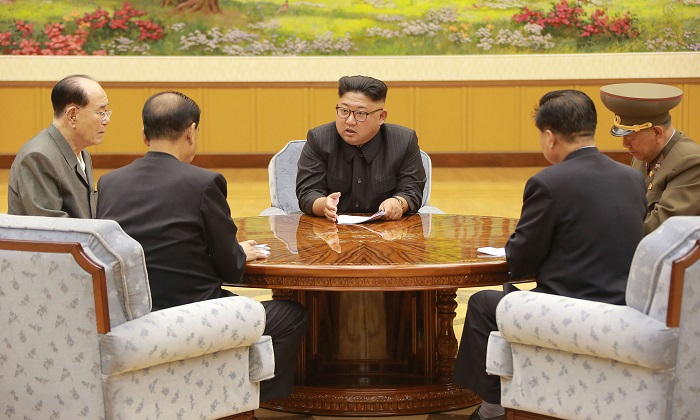 This picture taken on Sept. 3, 2017 and released by North Korea's official Korean Central News Agency shows North Korean leader Kim Jong-Un attending a meeting with a committee of the Workers' Party of Korea about the test of a hydrogen bomb. (STR/AFP/Getty Images)
Asia & Pacific

Evading United Nations sanctions was easy thanks to China, said a North Korean defector who once worked in Office 39, a shady money-making department dedicated to the North Korean leadership.

An anonymous defector told the ABC how part of his job was to sell North Korean gold overseas. To do that, he said it was smuggled into China where it was then sold into international markets as Chinese gold.

“You just change company names and have branches in other countries,” the man explained.

“It’s easy to operate in China. The border is a thousand kilometers and is wide open, so it’s easy to smuggle anything across.”

This was part of the anonymous defector’s interview with the ABC arranged with the permission of South Korean National Security. It is one example of how Office 39 made foreign currency—both legally and illegally—for Kim Jong Un and those close to him.

“Office 39 is an organization to get foreign currency for the leader,” the defector explained.

“In North Korea we called it the ‘revolutionary fund’.

“We exported whatever we could—gold, jewelry, farming goods—everything we sold to get money for him.”

The defector said he worked for Office 39 for five years in various locations across Asia.

“Office 39 just took anything that made money in North Korea. If it made money they took it, monopolized it,” the defector said.

“I’d estimate it accounted for 30 to 40 per cent of the total economy, all going to the top leadership while the people lived in poverty.”

Office 39 manages a worldwide network of companies that make an estimated $500 million to $2 billion a year for the North Korean regime, reported ABC. Office 39 is understood to have interests in Asia, the Middle East, Africa and Europe.

Office 39 has been accused of counterfeiting, narcotics sales, arms sales, and cybercrime in order to raise money. The defector said he had no knowledge how these activities operated but understood they were becoming more difficult because they were being exposed by the international community.

Speaking to the ABC in an earlier interview, defense analyst Andrea Berger said that Office 39 operates as a kind of royal slush fund.

“On paper Office 39 is just another department in the Korean Workers Party, but in practice Office 39 is the ultimate slush fund,” Berger said.

“It mixes both illicit and licit activity and creates that kind of support internally in North Korea to keep the leadership and the elite happy,” she said.

“Many have the view that North Korea’s actually extremely, extremely isolated from the international community, that it doesn’t have trade relations with the outside world, bar China, but the truth couldn’t be further from that,” she continued.

“North Korea is very sophisticated in concealing the fact that it is, indeed, doing business overseas. It’s good at hiding in plain sight.”