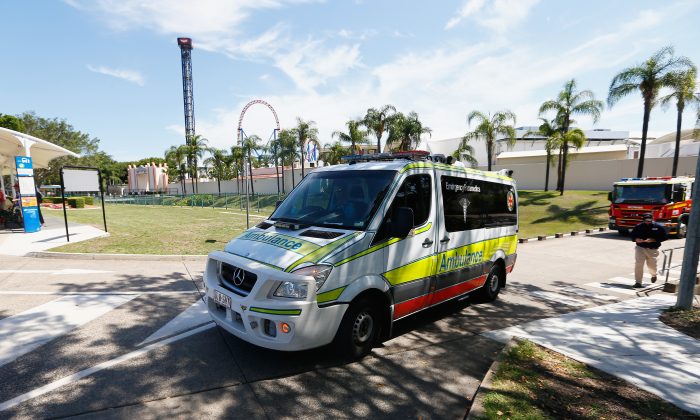 Off-Duty Paramedic Slashed With Knife in Front of Children

An off-duty paramedic was allegedly grabbed from behind and slashed with a knife in front of her two children on July 13.

A female paramedic who had finished her shift but was still in uniform was buckling her two children, aged four and six, into the back seat of her car while she was parked near the Nepean Highway in Rosebud, Victoria, when a man approached her from behind and cut her with a knife, leaving a 15 centimetre wound to her chest.

“My back was facing the street and I felt someone come up from behind me and they pushed me up against the car. They put their arm over my shoulder and around my neck,” the woman who did not wish to be identified told 3AW on July 16.

“I thought it was a friend hugging me from behind, to be honest, to start with. Then I realised the hand was trying to find my neck.”

That’s when she pushed his arm down, causing the blade to hit her chest rather than neck.

Police say the suspect approached the woman on a bicycle and used a small flick knife in the attack before riding off, Fairfax reported.

Ambulance Victoria’s chief executive Tony Walker said the attack may have been targeted because the victim was in uniform at the time.

“[It was] a horrendous assault on someone who has finished her day shift, has picked up her kids, was picked up some dinner … and she’s been assaulted by someone who we think we may have treated as a patient in the past,” Walker told 3AW.

“Thank goodness it hasn’t gone deeper than a superficial wound—it was a few centimetres away from being life ending.”

The woman, a paramedic of 13 years, said she may have previously treated the suspect.

“I think I may have known him, I may have treated him in the past. I’m not 100 percent sure. I didn’t see his face at the time but I did see him in the street as I was pulling up, so it is a possibility it was somebody I’d treated,” she said.

The woman was taken to nearby Peninsula Health for treatment and was later discharged.

On July 14, police reportedly arrested a 47-year-old man in relation to the attack, according to Fairfax.

The attack comes after the state government recently moved to crackdown on violent attacks on emergency workers.

The Andrews Labor government introduced new laws in June to ensure that people who assault emergency officers are sentenced to jail. The reforms came in response to significant public backlash after two women avoided jail-time after being found guilty of a serious assault on a male paramedic. The attack left the paramedic with career-ending injuries.

Walker said he was not sure the new laws would apply to the current attack given the woman was off-duty at the time.

He added they may now have to warn staff not to wear their uniforms when they are off-duty.

“It’s getting to that point. We have previously, during particularly elevated security risks, advised staff to be careful [by] not wearing the uniform outside of work,” he said.

The victim, who is taking time off work, said the attack left her feeling scared, shocked, and disappointed.

“I know I won’t wear my uniform home again,” she said.