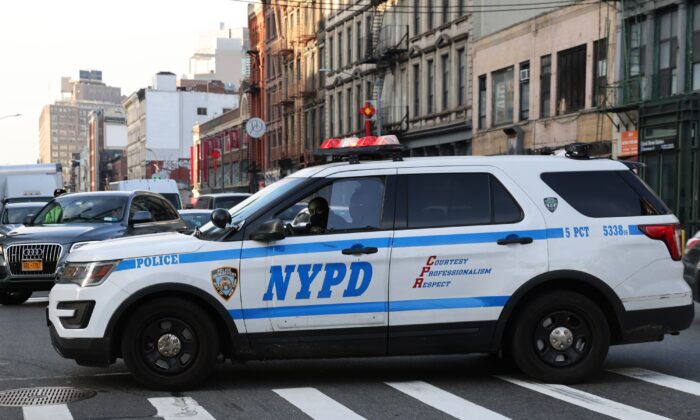 A police car drives through the Manhattan borough of New York City on Jan. 14, 2021. (Spencer Platt/Getty Images)
Crime and Incidents

An off-duty cop from the New York Police Department (NYPD) was the victim of a mugging when he went for a jog Tuesday morning in the Bronx borough of New York City.

The 48-year-old police officer, who has been working at the Central Park precinct for 18 years, was jogging near 823 Olmstead Avenue when he was attacked by three men, The New York Post reported. The alleged assailants reportedly struck the cop’s head repeatedly, leaving him with a fractured skull and bleeding in his brain.

The attackers drove off in a black Honda sedan with the victim’s wallet, keys, and cellphone, police said. His wallet contained various forms of ID, debit cards, and credit cards.

When the cop was discovered by fellow officers, he was lying on the street unconscious and bleeding from his ear, police said. He was transported for treatment to the Jacobi Medical Center and listed in critical condition.

It was only by Tuesday night that he was identified as a police officer. No arrests have been reported, and an individual who witnessed the mugging refused to cooperate with investigators, police said.

In a response to the incident, the Police Benevolent Association of the City of New York (PBA)—the largest police union representing officers at the NYPD—called out the justice system for failing to keep criminals away from the streets.

“While we pray at our injured brother’s bedside tonight, police officers across this city are searching for the cowards who did this to him. Make no mistake: we will find them,” Patrick J. Lynch, president of the PBA, said in an Aug. 23 press release.

“But we will need the rest of the justice system to step up and do its job, too. This is what happens when our leaders refuse to hold criminals accountable—not even a police officer can walk these streets safely.”

According to the police, the attack on the cop matches a pattern seen in 19 other recent robberies in New York City.

In New York City, felony assault and other major crimes have spiked in 2022. By the end of July, the NYPD recorded over 29,000 major thefts, a category that only includes theft of items valued at $1,000 or more. This is the highest number since 1998 and almost 50 percent more than the same period in 2021.