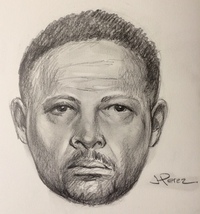 A police sketch of a suspect who assaulted an off-duty police officer. (NYPD)
Crime and Incidents

A 29-year-old NYPD detective is kept in coma after a hit in the face by unidentified man Saturday.

The officer, off duty at the time, was waiting for a No. 6 train at the 23rd St. subway platform around 6:30 p.m. He was accompanied by his cousin, who went to talk to a panhandler, unidentified law enforcement sources told The New York Post.

A man in his forties came between the panhandler and the cousin. An argument broke out and the man hit the policeman in the face. The officer fell hitting his head on the floor. The impact caused “bleeding on the brain,” the Daily News learned from an unidentified police source.

A police representative said the policeman, six years on the force, is still in the hospital and is being kept in a medically induced coma as of 12:30 p.m. Sunday.

The suspect, accompanied by two females, fled the scene and is still at large. He is described as a black male in his early 40s, 5-foot-10 to 6 feet tall, about 200 pounds and wearing a white T-shirt and blue jeans, according to a police description.

The police released a sketch of the suspect, but no pictures, though the representative said he may have been caught by a traffic camera.