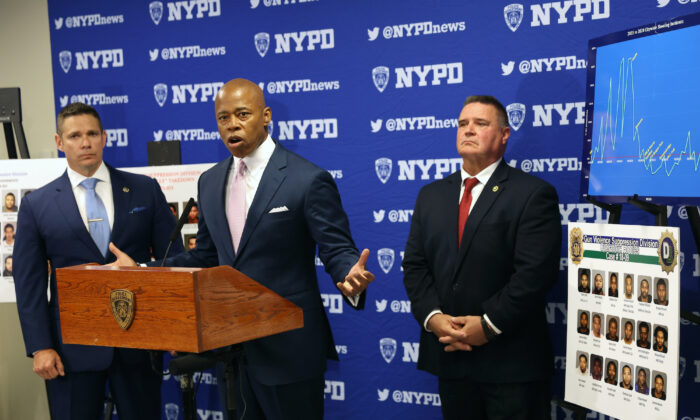 New York Mayor Eric Adams is joined by NYPD Deputy Chief Jason Savino (left) and NYPD Chief of Detectives James Essig at a Brooklyn police facility where it was announced that arrests have been made against violent street gangs in New York City, on June 6, 2022. (Spencer Platt/Getty Images)
Crime and Incidents

An off-duty New York City correction officer has been hailed a hero after he shot a man who pointed a gun at a crowd at a memorial service in Queens on Sunday night.

The incident occurred at a Queens motorcycle club around 8 p.m. during a memorial event. Police said the off-duty correction officer, David Donegan, was in the vicinity of the crowd and “saw the male pointing the gun at the crowd.”

Donegan quickly took out his gun and fired at the individual, striking his torso. Police confirmed that three individuals were transferred to hospital with gunshot wounds. It is unclear if Donegan was shot by the first or second shooter who got involved.

“Yesterday evening, as a crowd of people were observing an event remembering the passing of a friend, two individuals pulled out weapons and pointed them, firing at the crowd including our Correction Officer, David Donegan,” said Correction Officers’ Benevolent Association (COBA) President Benny Boscio in a statement.

“Thankfully, Officer Donegan, who was off duty at the time, immediately pulled out his weapon and engaged them, firing several shots. During the exchange of shots fired, our officer was hit in the leg and transferred to a nearby hospital.”

“He’s a hero. Taking proper action while off duty is one of the most difficult things to do,” said Adams.

He also said the shooter had a criminal record and was awaiting sentencing for a prior robbery with a firearm.

“While on sentencing he’s back on the street with a firearm. They’re finding their way back on our streets to continue to wreak havoc on innocent people,” Adams said.

Boscio said that while the police investigation was ongoing, “one thing is crystal clear, had our officer not exercised his training and made a split second decision, this incident could have cost many innocent people their lives, including his own. His actions were nothing short of heroic.”